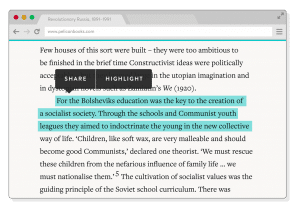 Many people in the publishing industry claim that the primary reason Penguin and Random House merged was to not only account for 1/4 of all books printed in the world, but to have better negotiating power with Amazon. We have all read the stories about the feud between Amazon and Hachette and this is a situation that will likely never occur with the new publishing … END_OF_DOCUMENT_TOKEN_TO_BE_REPLACED

BMG Rights Management and Round Hill Music have sued Cox Communications for music piracy. They did this because the internet service provider did not do enough to punish 200,000 users who downloaded illegal music. These two companies are clients of Rightscorp, a copyright enforcement agent whose business is based on threatening ISPs with a high-stakes lawsuit if they don't … END_OF_DOCUMENT_TOKEN_TO_BE_REPLACED

O'Reily is best known for their large library of technical eBooks and the fact they are all DRM-Free. This allows users to copy them to all of their devices, without the need of the unwieldy Adobe Digital Editions. If you are in the market for books about programming in Android, HTML5, Java or C++ you are in  luck. All eBook and video tutorials are 50% off until December 2nd … END_OF_DOCUMENT_TOKEN_TO_BE_REPLACED 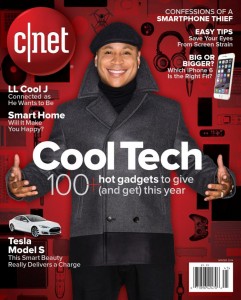 CNET has been a mainstay of digital news, video and podcasts that covers the entire tech world since 1994. Whenever there is a big launch from Apple or Amazon these guys are on the front lines giving the complete lowdown. The company is transcending the digital realm and is going to be releasing an annual print edition.CNET Magazine, a quarterly, will retail for $5.99 at … END_OF_DOCUMENT_TOKEN_TO_BE_REPLACED

Today we look back at the top news items of the week! Make sense of the shifting climates of digital publishing, eBooks and e-Readers in one concise video!Some of the news stories we follow this week are updates to the Amazon Kindle Fire Silk Browser for better security and the Sony Digital Paper available in a few stores in California and New York. … END_OF_DOCUMENT_TOKEN_TO_BE_REPLACED 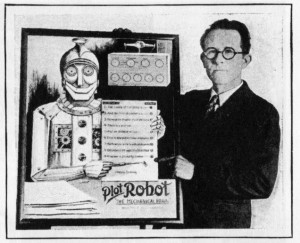 National Novel Writing Month is an annual tradition for writers looking to compete a body of work within one month. Former winners have actually secured lucrative publishing contracts and its an interesting way to force yourself to write a torrent of prose everyday. Last year, a small alternative movement has been gaining momentum called NaNoGenMo, for National Novel Generation … END_OF_DOCUMENT_TOKEN_TO_BE_REPLACED 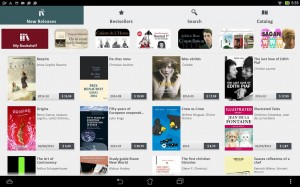 Ebookezvous is a French distributor who has been involved in the eBook space since 1999. The company has just opened up a digital store in the US with over 170,000 titles from 400 different publishers.The new store is available online and has a English and French UI, to allow prospective patrons to browse their selection of books. You can read them by using Adobe Digital … END_OF_DOCUMENT_TOKEN_TO_BE_REPLACED 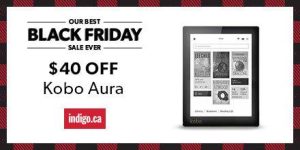 Chapters Indigo, the largest bookstore in Canada has just unveiled their Black Friday campaign. It is being spearheaded by the Kobo Aura, with a massive $40 savings, bringing the total cost to $99. There is also a free sleep cover being thrown into the deal to make this offer even more compelling.The Kobo Aura is likely the best e-reader the company has ever produced. The … END_OF_DOCUMENT_TOKEN_TO_BE_REPLACED 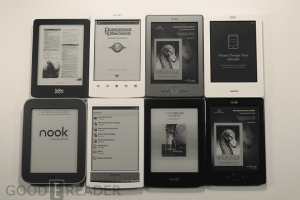 Good e-Reader has been going strong since 2007, when the original Kindle came out. We have made it our mission to chronicle the e-Reader, eBook and digital publishing sectors. We have been completely bootstrapped, using our own funds to travel to bookfairs and tech events to bring you all the latest trends in the industry. Additionally, whenever a new e-reader or tablet comes … END_OF_DOCUMENT_TOKEN_TO_BE_REPLACED 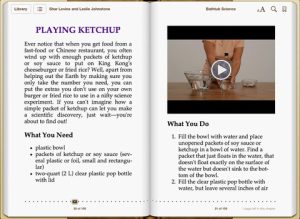 Adobe has been running a fairly popular service for the last few years that has been marketed towards independent authors, businesses and design studios to create enhanced eBook apps for iOS. Adobe has just confirmed that starting in May 2015, these companies will either have to find other options  to publish apps, or pay thousands of dollars a month.The Digital Publishing … END_OF_DOCUMENT_TOKEN_TO_BE_REPLACED 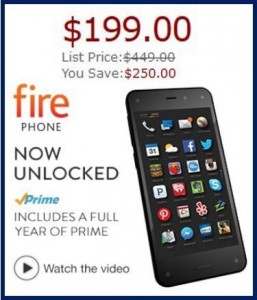 Amazon has been going through some growing  pains, to say the least, with their first ever smartphone. The AT&T exclusive  provided a barrier for mass adoption and the $699 unlocked price tag scared off most early adopters. The Fire Phone is basically relevant only in the US, due to a number of core Amazon services not working, such as Prime Instant Video. Things are … END_OF_DOCUMENT_TOKEN_TO_BE_REPLACED