Rhonda Rees has been an advocate for online book piracy awareness, appearing on TV, radio, online and in print. She has given a webinar on the topic with the Independent Book Publishers Association, and has been in contact with the US Chamber of Commerce – Global IP Center, the Copyright Clearance Center, the Authors Guild, IP Watchdog, the Counterfeit Report, Piracy Trace, MUSO Company, the Book Publicists of Southern California, The Small Publishers Artists and Writers Network and more. In 2015-2016 the Bulldog Reporter named her Publicist of the Year for her online book piracy media awareness campaign. 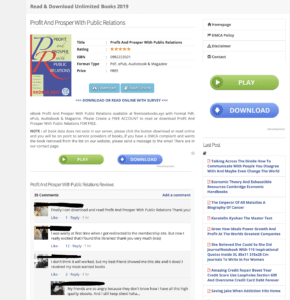 In looking through the most “persuasive words” lists in the English language, FREE comes up just about every time.  It’s not surprising, as many people reacting to this word become very excited when they think that they are getting something they won’t have to pay for. That’s fine, as long as the giver is doing it legitimately, and the receiver knows what he or she is getting … END_OF_DOCUMENT_TOKEN_TO_BE_REPLACED