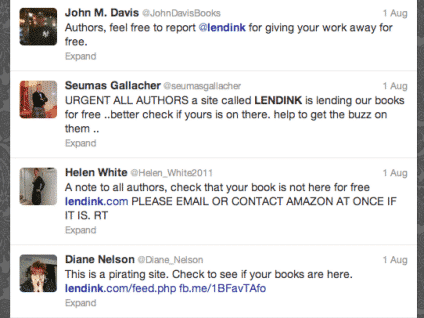 When authors submit digital ebooks to Barnes and Noble or Amazon, they have the option to “Opt in” to their books being loaned out. Both companies allow purchased books to be lent out one time per customer, for up to two weeks, and then the book is unable to be loaned out ever again. There are many websites that offer this type of service that in essence connects users up who don’t know each other, but enjoy the same type of books. Lendingbook, ebookfling, and LendInk are among many companies that make next to nothing and offer the service for free. Disgruntled authors waged an online campaign that resulted in LendInk being shut down, but was it right?

Many digital authors who submit the books to Amazon and Barnes and Noble don’t often read the small print or worry about boxes that are check-marked by default. They are more concerned with their cover art and formatting, so the book looks airtight. Many authors we have spoken with had no idea they had ever opted into Kindle Lending or Lendme by Barnes and Noble. B&N has taken the lending of books one step further and developed on every e-reader and tablet an online portal to make lending books even easier.

Amazons terms state that “Kindle books can be loaned to another reader for a period of 14 days. The borrower does not need to own a Kindle—Kindle books can also be read using our free Kindle reading applications for PC, Mac, iPad, iPhone, BlackBerry, and Android devices. Not all books are lendable—it is up to the publisher or rights holder to determine which titles are eligible for lending. The lender will not be able to read the book during the loan period. Books can only be loaned once, and subscription content is not currently available for lending.”

Amazon’s terms of service seem fairly straightforward, but authors went on an online rampage saying that this website was pirating books, because the authors did not approve it. On the Kindle Boards one author said that “I noticed my work there and sent the site a Cease and Desist Notice, giving them 48 hours to remove my work or face prosecution. They were in breech of copyright and deserved to be shut down. Am I proud they have been shut down? Am I proud to have stood up for my legal rights as author? You betcha! If they were a legitimate site and had written consent from each and every author to display their work for free (forfeiting their royalty income as a result) then I doubt very much that the site would have suddenly disappeared overnight. I am tired of plagiarism, book piracy and cheap-*ss scum bags who won’t part with a measly $2.99 or $4.99 to support authors and show respect for their hard work, not to mention the graphic artists, editors, photographers who also contributed to the birth of an author’s ebook.”

This is one author of many that took to Facebook, Kindle Boards, Barnes and Noble forums and anywhere else they normally self-promote their books in the hopes that someone will purchase a copy. Cease and Desist orders were sent to LendInk’s ISP and even their Facebook page went down. Chalk up another victory for authors fighting the scourge of piracy, right?

It is no secret that Good e-Reader had purchased Lendingbook.com last year and our website functions the same as LendInk. People who purchase lending enabled books have the option to share them for up to two weeks with friends. Our website’s premise to connect up people who don’t know each other but have the same taste in books. We help authors gain sales by plastering BUY IT NOW for both Amazon and Barnes and Noble Books. Often, when someone reads the first book in a series and really likes it, they will purchase other copies instead of waiting. We literally provided authors with over $40,000 in revenue in 2011 and made nothing in return.

All the time authors send us emails asking why their books are listed on our website without their permission. It is fairly simple to explain they opted into digital lending, but most don’t understand the underlying semantics and how lending actually works. LendInk was destroyed because they were blissfully unaware of the negative backlash until it was too late and instead of waging a PR campaign, they threw in the towel and gave up.

There are a number of highly competitive websites out there that compete with each other to provide a mostly free service to borrow and lend out ebooks. This has nothing to do with piracy and everything to do with giving authors wider exposure and facilitating the lending process, which is very complicated via Amazon.

Dale Porter, the owner of Lendink, stepped forward to fend off some of the negative backlash of the piracy claims. He was asked by authors that since his website was down, he must have been a pirate. Dale retorted “Really, this is proof that we were pirating ebooks? The fact of the matter is that our host company was so overwhelmed with hate mail and threats of lawsuits that they felt they had no choice but to suspend the site. These hateful people did nothing but harass and threaten LendInk and our host company to the point that it just didn’t make sense to keep the site online. For those of you on this site that are patting yourself on the back for bringing Lendink down, shame on you. I only hope at this point that you see the same results with your books and your writing career.” For everyone that thinks that websites like Lendingbook and LendInk make tons of money he said “Lendink is a California based company and as such, was cut off from earning money from sales when Amazon and the State of California disagreed over the collection of State Sales Tax. Amazon cut off all of their California affiliates from earning money via their affiliate program. It was not just Lendink. This only prevented us from earning money via Amazon. It did not however stop use from matching people for book lending.”

At Good e-Reader, we love promoting indie authors and have been been profiling them on our main website for over two years. We write book reviews and even connect up authors with editors and book cover artists to help in their quest to write an awesome book. In many cases, most authors are not technically savvy and have to rely on other people in the pipeline to help with the book. Destroying a small company because of perceived piracy and running someone out of town for doing nothing but facilitating the lending process is really disappointing to me.

With LendInk gone for the immediate future, you can still get your fix from our own ebook lending site:  http://lendingebook.com