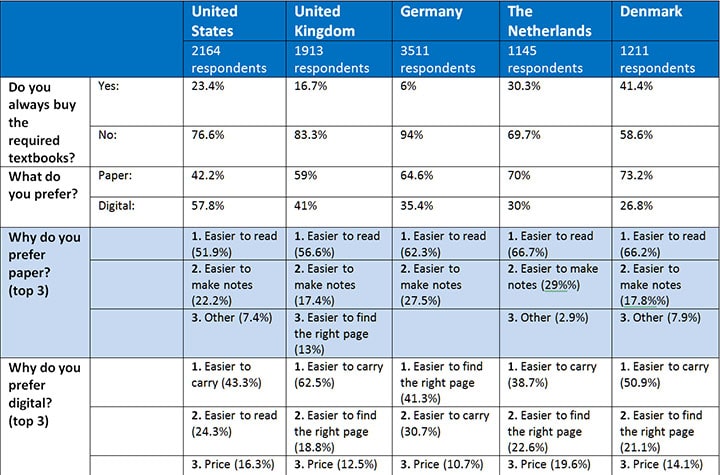 A new survey has been conducted by BookBoon on people’s preferences between ebooks and the printed textbooks in the school environment. Over 2164 US students partook in the study, which gives us some solid information the digital vs print debate.

Over 75% of US students regularly choose not to buy the textbooks their professors require, citing the huge expense involved. Statistically, on average they spend around $655 per year buying textbooks required for their studies.

58% of all students polled said that they tend to prefer digital textbooks. This is because students find them easier to carry, to read from, and believe they are cheaper. The same survey was carried out in Europe, where the results were strikingly different. Bookboon’s COO Thomas Buus Madsen said, “American students are  at least a couple of years ahead of their European counterparts. In countries such as Germany, the UK and the Netherlands, only around 30-40% of the students prefer digital textbooks. Most European students stick to paper. This is partly because eReaders and e-texbooks are less availible. Additionally, publishers, professors and universities in Europe are less active in promoting and adopting the use of e-textbooks compared to the USA.”

The Bookboon textbook survey was conducted in the summer of 2012 between the 1st of June and the 1st of September. The survey was conducted in the United States, the United Kingdom, the Netherlands, Germany, and Denmark. Respondents were gathered through the Bookboon student newsletter and through Facebook advertising. In total, 9,944 students completed the questionnaire, which consisted of 11 questions regarding the use of textbooks. Table 1 gives a summary of the survey results for the different countries.