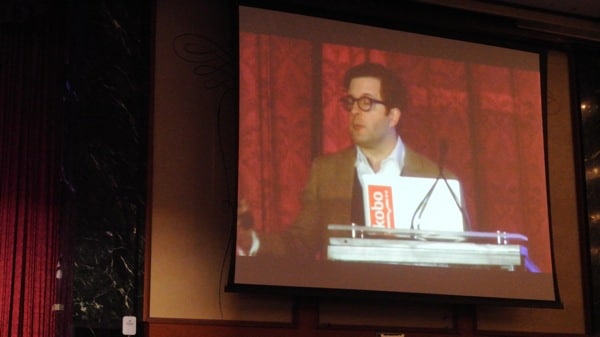 Michael Tamblyn, Chief Content Officer, Kobo Inc. discussed Kobo’s role in the indie environment. Kobo had a fantastic December as it doubled content sales and device sales were up 150%. After Google left indies, Kobo jumped in with the ABA.  Google had asked retailers to compete online, which is very hard to do, and booksellers are not set up to do this. Kobo felt that they could leverage the strengths that they already had. One of the major things that booksellers can do is to hand sell and they have a relationship with the customer.

Some of the problems they faced included how to distribute to all these indie bookstores. They couldn’t use any of the typical electronics distributors. Kobo realized that indies already use Ingram and so tapped Ingram to do the distribution. Another problem was how to get people trained to answer customers’ questions. They put together a 26 person field team to do education.

Devices went into 450 ABA stores in November, and Kobo has now been able to get a sense of how an indie book reader is different. They buy more expensive ebooks and have a completely different price tolerance from the “regular” ebook reader.  Indie ebook buyers buy less backlist titles and they buy at a much higher price level. They also buy different ebooks in that they buy less fiction and much more non-fiction biography, business, history, political science, etc. For the fiction sales, indie buyers purchase much more literary fiction and less genre fiction. There is also a “shocking” lack of romance and erotica.

Kobo is going into the indie space because they feel that there is a core of traditional readers that are on the sidelines and waiting to make a decision as to whether to jump into digital. They also feel that this is good practice to moving overseas where indies are far more prevalent, as many countries do not have a dominant national bookstore chain.