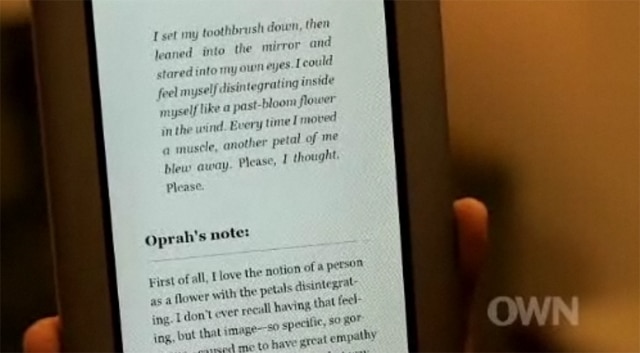 After a two year break, Oprah Winfrey is re-launching her seminal Oprah’s Book Club. Not only will it follow the old traditional template where she picks a number of books each year and bookstores across the world put her seal of approval on it, but the digital aspect is going to be enhanced.

Oprah recognizes that many people have abandoned print books in favor of ebooks and digital content. The new Book Club 2.0 will feature margin notes written by Oprah herself, so you can get a sense of what she likes about a particular chapter or passage. There will also be social media elements, too! In the new version of her book club, Ms. Winfrey will solicit questions from readers on Facebook and Twitter, using the hashtag #oprahsbookclub, and answer the questions online.

“This is a book club for the way people live and read today,” Sheri Salata, the president of OWN, said in a statement. “In addition to the traditional way, we also access books on smartphones, e-readers and tablets and we talk to our friends about them through social media. Oprah’s Book Club 2.0 takes the Oprah.com online community, readers of O Magazine and OWN viewers and connects them through their shared love of great books.”

Many people are super excited about the return of the Book Club, which was suspended when she quit her daytime television show. She would often take obscure authors with no following and make them household names. “When it comes to a book, there is no better recommendation engine than a nod from Oprah,” said Paul Bogaards, a spokesman for Knopf, part of Random House and the publisher of “Wild.”