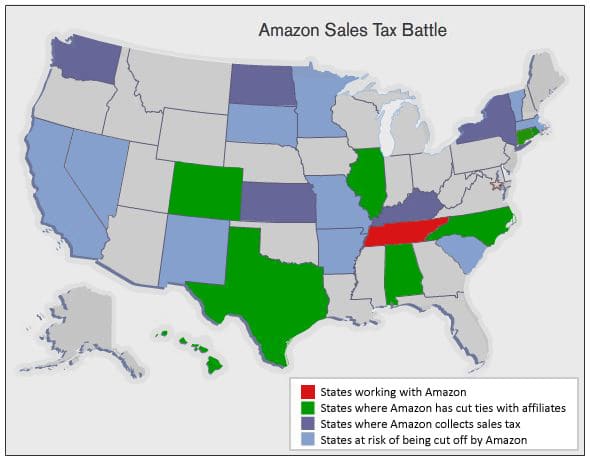 Nearly twenty years ago, the U.S. Supreme Court handed down a ruling that went on to protect internet-based businesses from collecting sales tax in states where they do not have a physical store or office. While that ruling pre-dates internet commerce and was meant to apply to mail-order businesses, the spirit of the law still applies to online retailers.

But when a sizeable number of states recently wanted to make up for lost revenue coming out of a severe recession, several state governments went after arguably the biggest fish in the online retailer pond, Amazon.com. These states are attempting to skirt the issue of the Supreme Court decision by broadening the scope of what is considered a physical address, thereby attempting to force the online giant to collect—and therefore, turn over—sales taxes in the tens of millions of dollars annually per state. In many states this newly proposed change is even being called the “Amazon Tax,” indicating that many politicians aren’t even pretending that this has nothing to do with targeting one of the largest online retailers out there.

Amazon had a quick comeback for those states pushing the issue: back off, or we’ll sever all ties with your state’s businesses. It wasn’t an empty threat and the notification came effective immediately. Amazon will no longer allow affiliate partners to place Amazon’s logo on their websites in order to earn a portion of the sale proceeds in states that have passed this broader tax.

But in recent news, one state has managed to back-paddle from its earlier threats of heavy taxation, ending up in a mutually beneficial arrangement with Amazon. In exchange for the creation of over 5,000 new jobs and $300 million dollars invested in building new distribution centers in the state, the Texas legislature is considering passing a bill making Amazon.com exempt from collecting sales taxes in their state. This deal would be very similar to one already passed in South Carolina in May of this year.

Obviously the Texas Retailers Association isn’t pleased, as it speaks for the states’ stores, namely, the brick-and-mortar bookstores who see this as just another way Amazon.com is getting a leg up on the competition; Amazon seems to simply be asking the state governments to do what has already been upheld at the federal level nearly two decades ago.