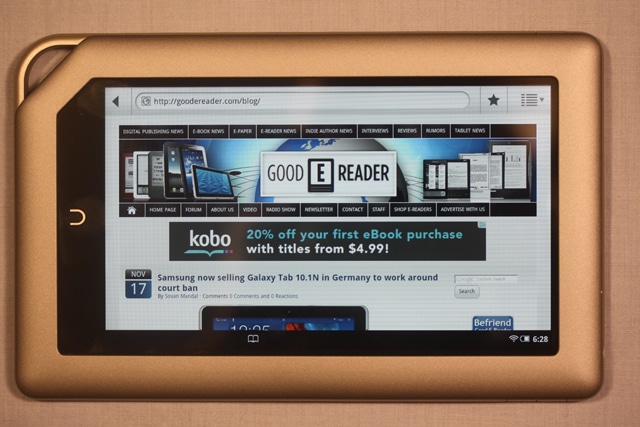 Barnes and Noble today officially unveiled the brand new 8 GB version of the wildly successful Nook Tablet offering today! This new tablet is much akin to the 16 GB model in terms of form and function. It is available now at most Barnes and Noble Stores and their other retail partners for $199.99.

So how did Barnes and Noble lower the cost on the Nook Tablet and still offer it at a respectable price? They lowered the internal memory from 16 GB to 8 GB and lowered the RAM from 1 GB to 512. It still features a 1GHz dual-core processor and a 7 inch screen with a resolution of 1024 X 600 pixels.

I think it was important for B&N to offer a tablet for the same price as the Amazon Kindle Fire and Kobo Vox and not lose money on the whole deal. This is why they decided to lower the RAM and internal memory, which is fine because you can still enhance it via MicroSD up to 32 GB. Speaking of memory, 5 GB can be used for your own content such as movies, music, and books while 1 GB is reserved for Nook Store purchases.

The Nook Color, which was the company’s first tablet and is still fairly respectable in terms of hardware and performance, was price slashed today. You can now get a new Nook Color for only $169.99, which makes it a very viable entry level device. If you are on a budget and had to choose between say a Pandigital Novel, Micro Cruz Reader, or other woeful offerings, get the Nook Color.