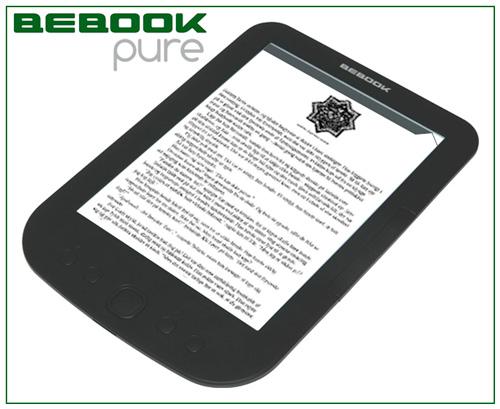 When Endless Ideas went Bankrupt in early 2012, some people thought it would go the route of Cool-ER and never be heard from again. This changed with the company was acquired by the BAS Group less then a month later. The company has just released a new cost effective e-reader in Europe called the BeBook Pure.

The Bebook Pure features a six inch e-Ink Vizplex display with a resolution of 800×600 with 16 shades of gray. It has a 600 MHZ single core processor and 4 GB of internal memory. If this is not enough,  you can further expand it up to 32 GB via the Micro SD card.  Battery Life is around one month of constant use and reads a myriad of eBook formats, such as; TXT, PDF, EPUB, PDF, FB2, HTML, RTF, MOBI.

The Bebook Pure is not a touchscreen e-reader in similar vein of the Kindle Touch or Kobo Touch. Instead you interact with the unit in similar fashion as the Bebook Club S, with the D-Pad and 4 main buttons. There are also manual page turn buttons on the on the right hand side.

There are not many retail websites currently carrying this new device, that costs around 90 Euros. Currently it is available in the Netherlands, Australia, Germany, and the Czech Republic.

Update: The BeBook Pure is available in the UK now for £69.