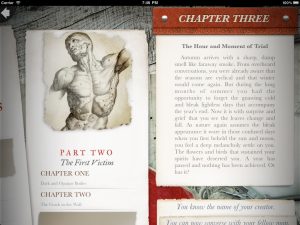 There is no shortage of digital publishers or app book developers and making oneself stand out can be difficult in a sea of engaging interactive content. In order to get noticed, the product has to be both laudable and diverse. For British developer inkle, founded by Joseph Humfrey and Jon Ingold, working with Profile Books under the direction of Michael Bhaskar to bring the interactive Frankenstein app to fruition has helped bring some attention to the company.

“The market is in an interesting place right now,” said Jon Ingold in an interview for GoodeReader. “There are quite a few enhanced ebooks, but they all do different things, and no-one seems to have quite decided what enhancements to make, and how. But as you’ll have seen from reading Frankenstein, our take on this is quite different – we’re not enhancing a book, but finding a new way to weave one together, by changing the reading experience into something closer to a “conversation with the protagonist”. It’s more like an evolution of the diary- or letter-writing form of storytelling. I’ve yet to see another book-app do that so I think we’re unique in that!”

“In the wider picture, I think content is important but it’s important to remember that it’s not the whole battle. Here at inkle, our background in the video-game industry and we’re trying to bring some of the sense of “flow” that is bread-and-butter to good gaming to the e-reading space. So it’s not that we think Frankenstein is a game – it isn’t – but rather, as soon as the reader is putting something into the story, and getting something out, there’s got to be the pacing, and design focus to support that interaction.”

But every company thinks its product is exciting. How does a company go about creating content that actually gets attention in an over-crowded market?

“I think that’s the tipping point for making an app get noticed. Not what it does, so much as how it does it. Does the way the app functions draw the player into the world of the story, or place the story at a more-confusing remove? A good app should be invisible, just as a good theatre set should be invisible.”

In an effort to make a name for itself and to be prominent in the industry, why would the app book developers choose to start with something that has been done so many times—and done very, very well, such as in the case of Bekka Black’s fall 2012 release of the YA interactive version, which follows her highly successful iDrakula enhanced ebook—rather than developing an original in-house book or tackling an unpublished, dynamic story line?

“What is its appeal?,” asks the inkle version’s author, Dave Morris, in a related interview. “David Benioff, the show runner on Game of Thrones, says that a tragedy is the story of the conflict between two heroes, not a hero and a villain. That’s what the original Frankenstein story is about. Both the main characters have good and bad in them – just like the rest of us. The moral choices they face are not easy ones. There is a tremendous depth to this story that puts it alongside greats like Steinbeck and Faulkner. Modern readers are getting more sophisticated, and they’ve shown that they appreciate stories with more complex characters. Victor and Adom (yep, now the monster has a name!) do terrible things out of hate and love and the gray area in between. For me, that’s always going to beat a guy in gory makeup going, ‘Rarrgh!’”

Morris continued, saying, “A lot of people these days are only familiar with Frankenstein from movies and comic books. Or, at any rate, their view of the story has been filtered through those media. And that’s a shame, because they may not be aware of how revolutionary and original Mary Shelley’s novel really is. Having said that, the novel is nearly two hundred years old. The writing style of that time kind of puts up a wall that deters new readers. It’s like all those seminal silent movies from the 1920s that are still breathtakingly original but hardly anybody watches them. So for today’s readers to get Frankenstein there really needs to be a kind of translation. That’s what this version is – a rebuild of the original novel in a form that will, we hope, allow it to reach a far wider market.”