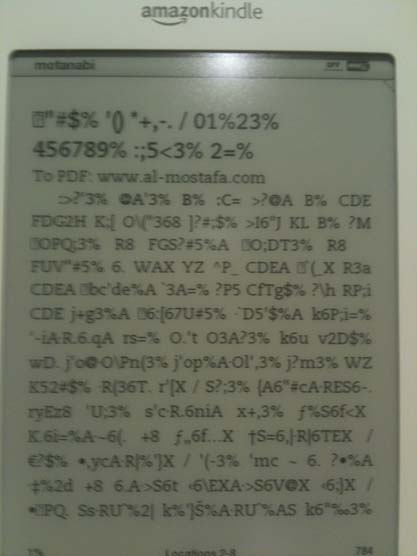 Data Conversion Laboratory issued a press release earlier this week that indicates that reading consumers are speaking out against poorly formatted and error-ridden ebooks, sometimes even those works that have been commercially produced through major publishing houses. In a survey conducted by DCL, over four hundred respondents cited quality as the number one issue of concern in digital reading. GoodEReader spoke with the CEO of Data Conversion Laboratory Mark Gross in an interview today.

“DCL has been around for thirty years. Our business is converting all kinds of documents so they can be used electronically. We have clients who are publishers, as well as the military, government agencies, insurance companies, and pharmaceutical companies. Over the last three to four years there’s been a movement to go into ebooks, but in the last year it’s become quite interesting to see what’s going out there and what our customers are thinking.”

Gross blamed the wealth of free converting software titles as well as the rush to get ebooks onto the market, even among bestselling titles, for the often poorly formatted ebooks.

“There are a few utilities out there that will convert books for free. A few months ago one of our staffers sat down with a document that contained novel-like text material to try some of them out. Even with the simple document, a lot of formatting errors came through. It’s something we’ve also seen in commercially produced ebooks.”

“There’s been a push in the last year or so to get as many ebooks out as possible and the quality shows. The survey that we did shows people’s attitudes towards this. The overwhelming thing respondents demanded in the survey was quality, even above cost of the ebooks. When a market first develops, the early adopters are willing to forgive things because they’re the techies and they know this is new, but as the market broadens the people who usually read print books aren’t going to stand for this. You’re going through a larger audience of people who aren’t just the early adopters. It’s also not just simple books any more, but also books that are mission critical. The publishers we’re working with produce textbooks and medical books.”

And those technical books are becoming very important to the market. The survey showed a surprising number of people—64% of those who responded—are interested in trade manuals and textbooks that have been digitally published. Non-fiction was included in that response number.

“The public will punish those ebook publishers buy simply not buying their titles. I’ve seen articles about people returning ebooks because of the errors in formatting, and you see blog comments and reviews on books that mention these mistakes. I’ve heard authors talk about a particular publisher they were using due to very low cost, but the errors made them rethink it. The market will dictate the readers’ demands for error-free reading.”

For indie authors interested in the findings of DCL’s survey and the steps that can be taken to ensure formatting quality, their site offers a webinar on the information and the following press release outlines the suite of tools available to authors and publishers alike. Most of the conversion applications being used today were developed by DCL in the course of its thirty years, although the company still relies on manpower to review its formatted content.