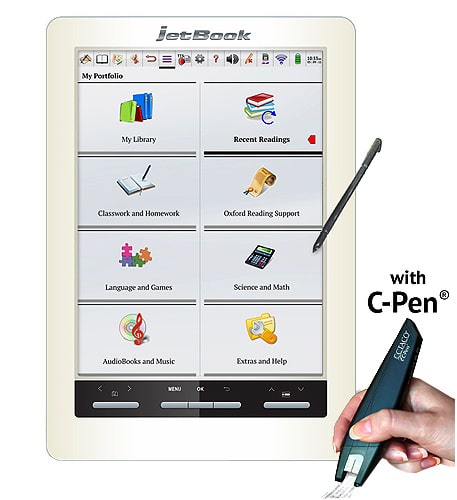 The Ectaco Jetbook Color has been on the market for around a month now and it’s one of the best 9.7 inch e-ink e-readers on the market. Today Ectaco announced they were releasing a deluxe version of the device with a C-Pen for $599.99

What exactly is a C-Pen? It is the same little gadget that was bundled with the Jetbook K12. It plugs into the USB port of your e-reader and gives you the ability to scan text in textbooks or other tangible things and digitally transcibe it into your Jetbook Color. It is a unique little accessory that is more applicable to students who use it in the classroom. Let’s face it, the digital classroom is a fairly new thing and most schools end up using a combination of electronic books and the hardcovers. The main benefit of the C-Pen is that instead of highlighting passages or noteworthy material inside the book, you can scan it and put it in a dedicated file. You can then export this file into a text file and use it later.

The base model of the Jetbook Color costs around $499 and the new Deluxe model is $599. So you are basically paying an additional $100 for the C-Pen. Is it worth it? Well, we tested it extensively for around a week and found it actually works very well. It is certainly very niche and appeals mainly to students, which this device is geared towards anyways. I can see many people scanning their notes with the C-Pen instead of mucking up their school issued textbooks.

We did a full hands on review of the only e-reader in the world to use e-Ink Triton Color e-Ink a few weeks ago, so check it out to find out all about this shiny in gadget. If you want to see what the C-Pen can do, also see our review on the Jetbook K12.