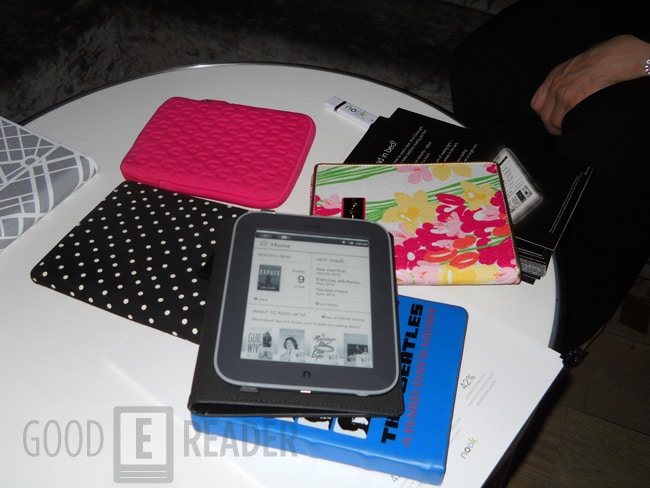 In New York today, Theresa Horner, VP Digital Content from Barnes and Noble, gave us a private tour of the new Nook Simple Touch with Glowlight! This is the first e-reader to employ technology that lets you read your books in a dark room.

We sent one of our freelancers, Jennifer Gracen, to check out the latest device from Barnes and Noble and she mentioned “The event was was held on the rooftop of the hotel, and I soon realized why. Very clever of them – they brought me outside, by the pool, to show me how the new Nook looks in bright sunlight, especially when compared to other products. They had the Amazon Kindle Fire, Apple iPad and Kindle Touch available as benchmarks. It blew them away, easily. It was the only one you could see the screen without problem. Then we moved back inside, where they had a darkened cozy corner with a bed (yup, you read that right) for me to climb onto and compare the products again. You could really see the difference; the new Nook had light, but no glare, not horribly bright, nice and soft light.”

The new Nook Simple Touch with Glowlight features a 6 inch e-ink display with a resolution of 800×600 pixels. It has an IR touchscreen which allows you pin-point accuracy when you interact with menus and eBooks. This device is 5% lighter in weight than regular Nook – exactly .695 ounces.  Battery life on average should last you about 1-2 months depending on use and goes into sleep mode to conserve battery life when you are not using it.

The GlowLight technology has LED lights embedded into the side of the frame. This solves the big issue of e-ink devices not having light emitting from the screen to read in low-light conditions. You can activate the glow feature by holding down the N button for two seconds and the screen will light up. You can configure the brightness settings of the glow feature in a dedicated menu in your settings. In order to turn this glowing feature off, you tap the center of the screen and it will display a little light icon that lets you disable the feature.

Finally there is some new designer covers that will be available on May 1st when the Nook Simple Touch with Glowlight is released for $139.99. If you live outside of the USA you can order this device from our retail website Shop e-Readers for $169. You will get to choose cases designed by  Kate Spade, Jack Spade, Jonathan Adler, Lilly Pulitzer, and exclusive Beatles covers that only Nook has rights to.