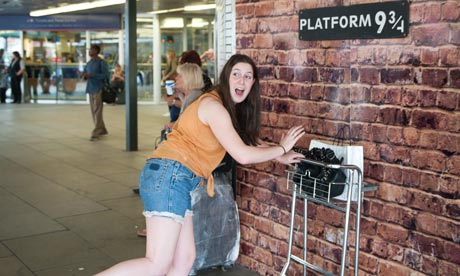 Harry Potter spawned an entire generation of readers that grew up with the books and continues to spawn huge demand for the series. Not only can you read the series, but the movies have been some of the highest grossing of all time and even Disney and other theme-parks have offered rides and a themed experience. The one thing lacking so far has been the books reaching the digital format and it looks like we will have to continue to wait.

Initially, Pottermore (the Harry Potter website developed by J.K. Rowling which offers interactive elements to the saga) continued to enjoy such popularity that the servers regularly crashed. The books were supposed to be launched a while ago, with Sony being the official partner. The books were supposed to come preloaded on the Sony PRS-T1 Wireless Reader, which obviously never actually happened. Many users were sending us pictures of their retail purchases of the Reader, where they pealed off the sticker on the front and found the Pottermore logo underneath it. Whether the entire deal fell through at this point remains to be seen.

Recently the blog arm of Pottermore released a poll that asked users how they thought about the entire series of books reaching ebook format. Obviously 90% of all users wanted it and is that really any surprise? You only have to look as far as major Torrent sites such as Demonoid and the Pirate Bay to see hundreds of thousands of downloads just in the last year. Why they have not released the book series yet in digital format is beyond me.

They continue to hype the fact that they are moving into the ebook direction and even officially announced it was happening. The problem is they continue to encounter delays and the hosting of Pottermore continues to experience a tremendous amount of problems. They obviously have never heard of cloud hosting or redundancies in splitting their website to “Content Delivery Networks.” The books have been pushed back all the way to mid 2012, when we should see the first book offered in ebook format.

The hold-up means Harry Potter ebooks will not be available for fans this Christmas, but the Bookseller’s Charlotte Williams, a registered Pottermore user, said this was unlikely to dent their popularity. It also, she added, suggested that Rowling and her Pottermore colleagues “are in no rush to launch anything until all potential problems have been sorted out”.

“Potter fans are so loyal, and it seems they have engaged with Pottermore even more than Rowling and co were anticipating, so I don’t think there will be major financial implications to delaying the launch of the ebook store,” she said. “It does mean that it won’t be open this Christmas, which might marginally affect Bloomsbury and the other publishers of Harry Potter worldwide, as maybe people will be talking about the brand slightly less and therefore buying fewer physical editions – but honestly, Potter is such a big brand, it is never far from readers’ minds. A delayed launch may even mean a greater second wave of excitement about the ebooks becoming available as the anticipation builds up over a longer period of time.”