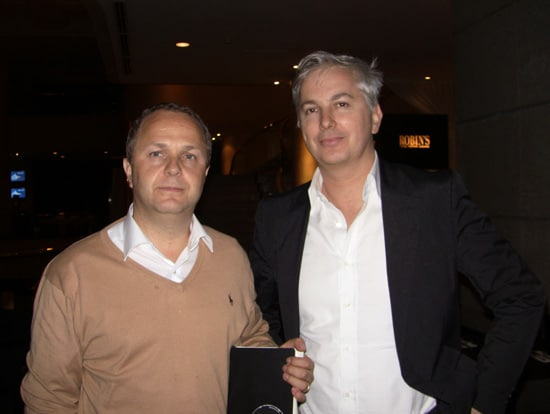 During our stay in Taipei, Taiwan for Computex, we have been previewing the very latest in tablet computers and e-readers. We bumped into the CEO of Txtr Christophe Maire and the Chief Commercial Officer Thomas Leliveld and talked about their company’s current state of affairs and what the future may hold.

Txtr was first known on the international scene with their e-reader that garnered a fair bit of buzz but due to circumstances the device was never released. They flipped gears in 2009 and started doing development for online digital publishers and traditional book sellers. Txtr has been working on overdrive during 2010 and 2011 becoming one of the largest companies outside North America developing ecosystems for other companies to facilitate e-commerce and application development. The company’s portfolio includes clients such as Vol Retail and Weltbilde, who is the largest EU book retailer.

Currently Txtr is based in Berlin, Germany and due to the European Union has a very strong presence in 18 different countries developing solutions in order to take their clients to the next level. The current corporate strategy is to develop online ecosystems to not only sell products, but also manage the hosting and localization environments. Many European countries have a wide array of languages and being able to deliver content in a localized manner is very important. Not only does the company develop commerce solutions, but they also develop applications for Android and iOS.

Obviously when we talked about iOS the subject gravitated towards Apple and their new mandate to handle all of the subscription and ebook purchasing. When we asked Christophe about their relationship with Apple he mentioned all of his applications are in full compliance with the new guidelines that has Apple limiting the number of books a retailer can offer. He went on to explain that many European companies are seeing Apple’s policy as alienating to publishers and agencies due to a myriad of factors. One of the main concerns is because Apple handles the sales aspect of books, magazines, and newspapers, which loses critical analytics of customer data, making it harder to attract advertisers.

Txtr has seen strong growth in the European market due to the company’s strong relationship with 3M, who owns 25% of the company. Rumors were swirling during the last few months that 3M was considering purchasing a higher stake in Txtr, but Thomas mentioned that this was news to him.

The 3M relationship with Txtr goes beyond the obvious financial benefits of being a partner with a large multinational conglomerate, whose presence is felt in many different technology sectors. The most prevalent factors were the research, development, and the sharing of technologies. When Txtr secured the initial funding from 3M they had toured the company’s headquarters in Minnesota and were blown away by how the research and development aspects of the company was handled. Currently the big 3M project focusing on ebooks was a new Cloud system for delivering ebooks to libraries in the USA. This new service is planned to launch officially in the next few months via proprietary hardware solutions. The new technology will allow customers to borrow ebooks from any library online or in the physical location and then read them on any Android device or certain e-readers like the Nooks. We posed the question, “Is 3M sharing their technology with you, either with the Cloud delivery of ebooks or the closed technology?” They mentioned that 3M indeed shares most of the e-reading and ebook technology with Txtr and it helped their company to really grow. Thomas really stressed that 3M views e-reading technology to be “a strategic field” and “e-paper is very important in future industries.”

We asked Christophe and Thomas about their direct competition and who they view has the most potential to take away from their market share. The big company that came up in conversation was Canadian based Kobo, who has made overtures to open up various European localized versions of their book store. Kobo originally announced this plan at the London Bookfair and should be launching six different stores by the summer time. Although Txtr does not really run its own bookstore, it has many clients who do and will adopt the wait and see attitude to see how the market reacts.

Speaking of the market reacting, we discussed the Agency Model of publishers determining the prices of ebooks, rather than the stores that sell them. The Agency model was adopted to promote healthy competition and preventing companies like Amazon from undercutting everyone to prevent new players arriving into the industry. The CEO mentioned how the Agency model affects their company and mentioned, “We think the Agency model is very positive and allows more companies to thrive in a hard market to break into. Recently we saw France officially adopt the agency model after many years of resistance and it allows more companies and publishers to offer new content.”

What is next in Txtr’s future plans? They intend to update their own Android software to version 4.0 in the next few weeks, which will add a new book shelf its application and make various enhancements. They also will be announcing a few new major partners that will fly under their banner.