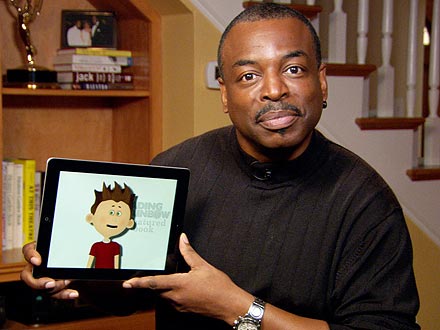 The Reading Rainbow television show was broadcast for almost two decades and it taught young children the value in reading. When the show was cancelled a few years ago, Levar Burton and producer Mark Wolfe sat down and decided what to do next. Today we spoke with Levar Burton, who is well known for hosting the Reading Rainbow television show for over a decade and famously played Geordi La Forge on Star Trek – Next generation.

When the Reading Rainbow show was originally cancelled on PBS, the two men hunkered down and evaluated the franchise and what they could do next.  Levar mused that “The next day after the show was cancelled we tried to come up with a new way to appeal to children. Their parents grew up with the show, but these days everyone is on the internet and watching videos on Youtube. There is definitely a generation shift in the way media is accessible and the decision to launch an iPad app made the most sense.”

The Reading Rainbow app for the iPad took around 18 months of solid work and was the first project launched by the newly created company RRKIDS. Within 36 hours of its release it became the #1 most downloaded app in the educational category on the Apple App Store. It is a free download and comes with over 100 books that are available, and if you want more, you can take out a subscription. The current deal gives you six months of full access for $29.99.  Levar elaborated that “It is easy to spend more then $5.00 for a kids’ book and we are living in tough economic times. We feel we are giving away tremendous value to families and offering a subscription to make ourselves more appealing. We are continuing to develop new content that will automatically be available to paid customers.”

The Reading Rainbow app features a ton of original content and appeals mainly to kids. There are some customizable features such as your “Backpack” that contains all of the books  you are currently reading. Books are attained when you visit different “Islands” that are themed. Each island has original video content that is hosted by Levar and is made specifically for the iPad app. “We ran the show for over two decades and had lots of content in the library. “We made a decision to film 100% original content exclusively for the app and will continue to develop more in the coming months,”  Levar said. We also asked him about any plans to take the expansive catalog of television shows and package them into the app. “Right now, we have no plans to use our television show for the app, but we may launch a new project in the future that will digitize the show in a new format”.

One of the ways this app is appealing to families is with the parental controls. It gives grownups the ability to monitor how many books your kid has read and how many minutes they have been reading. Lavar mentioned that “It was important for the iPad to be the kids, it was designed for them and we did not want parents talking it away or monitoring reading progress within the app. We created a web based tool that is connected to the main Reading Rainbow website,  it is more accessible this way and can be read on most devices.”

Right now the Reading Rainbow app is only available for the iPad, but we asked if there was any chance for an Android port happening anytime soon. Levar mentioned that by the end of the year, we will see it made available via Google Play.