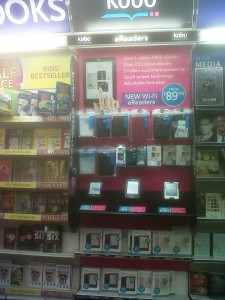 The Kobo WIFI was the second model the company ever made and has enjoyed fairly robust sales in Canada and overseas. This model of course is not the newest Touch model but a fairly budget friendly e-reader that is controlled by the D-Pad and manual page turn buttons. ASDA was one of the first companies in the UK to do business with Kobo and sell their devices in a retail setting. They have just put the Kobo WIFI on Sale from £67.00 to £49.00.

Really if you are looking for a fairly inexpensive e-reader you could do worse. This edition is a six inch e-ink pearl display and taps into a massive Kobo ecosystem. You can download newspapers, magazines and millions of eBooks. It connects up to your private or public WIFI to purchase content and then can be used offline to read all of your books.