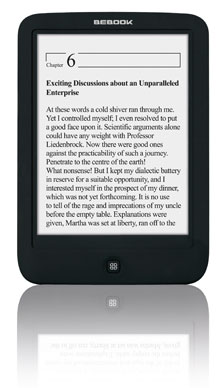 Bebook has released its latest e-reader that runs on the Android operating system. This suggests it has a full touchscreen and the developers said that the new OS gives them more versatility to add new features.

The Bebook Touch features a six inch e-ink Pearl display with a resolution of 800×600 pixels. It has 4 GB of internal memory and can be expanded up to 32 GB via the Micro SD card. The slim profile is the main selling point, with it being only 9mm thick.

Bebook is fairly solid at producing devices that read a myriad of ebook formats. It currently  supports  PDF and ePub, both with and without Adobe DRM (copy protection). But there’s more: take your own documents on the road with a broad range of file formats: .txt, .HTML, and .fb2, mobipocket (non DRM). This new device also has wireless internet access, so you can download books straight to it via other bookstores.

The reader is available in the Netherlands and Belgium. The company intends on rolling it out to other European countries in the next few weeks. It should cost around  £99.99 and might appeal to people who are not concerned with being locked into a specific ecosystem.