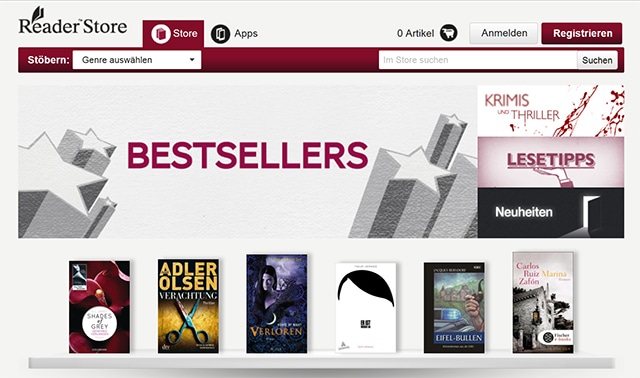 Sony has just launched a new ebook store in Germany today and it will allow customers to download thousands of books. One of the most exciting factors is that 2,000 of the books do not have DRM (Digital Rights Management) and will instead have digital watermarks. This will make it easier to transfer your purchases between your e-reader, smartphone, or tablet. The vast majority of English eBooks on the system will have DRM.

The German ebook market is one of the strongest in Europe, and Sony will be competing against Txtr and Thalia. Customers will have the ability to download thousands of ebooks with no DRM, such as Bastei Lübbe, Publisher for Ken Follett, Andreas Eschbach, Dan Brown, and others. Der Hundertjährige, der aus dem Fenster stieg und verschwand by Jonas Jonasson are available in German, Dutch, Spanish, Italian, French, and Polish; Ken Follett’s Winter der Welt in German, English, Danish, Dutch, Spanish, and Catalan; or J.K. Rowling’s Ein plötzlicher Todesfall in German, English, and Dutch. Fifty Shades of Grey is available in German, English, Danish, and Flemish.

If you own the Sony PRS-T1 or the Sony PRS-T2 you will be able to tap into the new German bookstore right on your device. If you have older models, you will have to buy books via the Sony Reader software and load them on your device. You can check out the wide selection of new ebooks by visiting the new website http://de.readerstore.sony.com.