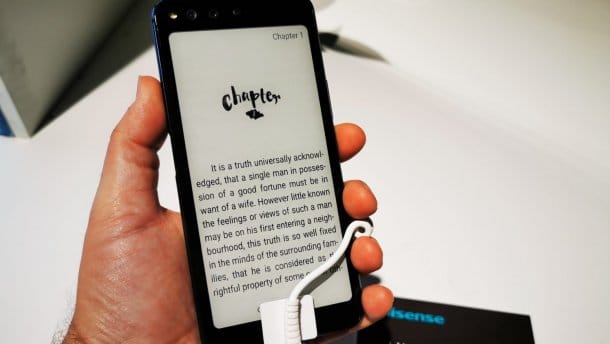 The Hisense A5 is one of the most interesting E INK smartphones because it was going to retail for $150 and features 5.8 inches E Ink Carta display with a resolution of 640×720 and you will be able to adjust the screen brightness with the built in front-lit system, but it does not have amber LED lights. Underneath the hood is a Qualcomm 660 Octa-core processor, 4GB RAM and 64GB of internal storage. You will be able to snap pictures via the 13MP rear facing camera. It is powered by a giant 4000mAh battery, which should provide 10 days of constant use.

Initially the Hisense A5 was supposed to be available in Europe, but it ended up only being marketed in China. It can be ordered on JD.com  and they are charging ¥1199 ($169) for the 4GB+32GB version. The 4GB+64GB version is also on reservation for ¥1499 ($212). They have been sold out as long as I have been checking. The phone is also available from a vendor on Aliexpress, but they are also chronically sold out and have marked up the price significantly. The cect-shop is selling pre-orders for $223 USD and many people who ordered them are wondering when they are going to ship.

I had high hopes for A5 and the Kingrow K1, but they are both impossible to buy.