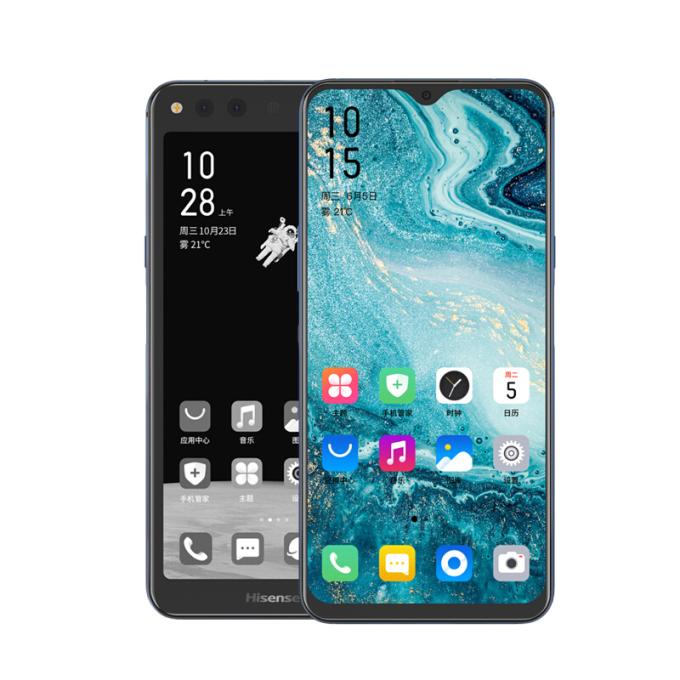 Hisense has two phones that are coming out in the next few weeks and they both feature E INK screens. The A6L is a dual screen device, one side is LCD and the other is e-paper, while the Hisense A5 Pro is a followup to the original A5 that came out a few years ago.

The HiSense A6L is a dual screen E INK smartphone with a 6.53 inch LCD display on the front and a 5.84-inch E-Ink Carta HD display on the rear. There is a front-lit display to read in the dark. Underneath the hood is a Qualcomm Snapdragon 660 octa-core chipset with up to 2.2GHz burst frequency, 6GB of memory and 64GB or 128 GB of expandable storage.  You can enhance the internal storage further via the MicroSD card, up to 256GB. The phone is powered by a giant  3,800 mAh battery and it supports Qualcomm Quick Charge 3.0. It also has 4G LTE, USB Type-C port, GPS, Bluetooth and Wi-Fi.

The dual rear camera takes pictures with a 24-megapixel main sensor and a secondary 8-megapixel camera lens. On the front, the 20-megapixel camera is used to take selfies, use the A6L for video calling or to securely unlock the dual-screen smartphone with your face. This device retails for $420 and is available now.

The Hisense A5 Pro features a 5.84-inch E INK Carta HD screen with a resolution of 1440 x 720. This Android 10 phone has a front-lit display, so you can read in the dark.  Underneath the hood is a Unisoc T610 quad core processor, 4GB of RAM and 64GB of internal storage. There is a MicroSD card slot of an additional 128 GB of internal storage.  A USB Type-C charging port, Bluetooth, Wi-Fi, OTG, a 3.5mm headphone jack, and a large 4000mAh battery.  The HiSense A5 Pro employs a 5 MP  front-facing camera and a 13 MP rear camera with LED flash. This phone has Android 10, which makes it the only E Ink device with such a modern version of Android. It retails for $289 and will be available in early June.