You are here: Home / Digital Publishing News / Apple to include Newspaper Article Subscriptions 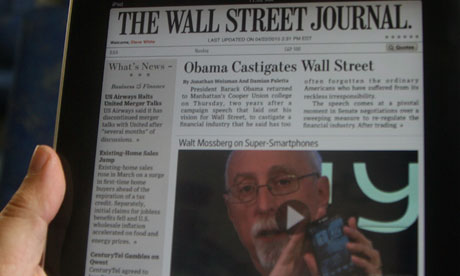 Hype is currently surrounding Apple as word is spreading that the mega company’s popular iPad is getting ready to launch a Newspaper Subscription Service. For the general reading public this is a great step forward, allowing increased accessability and hopefully affordability. The time a person can read the paper is no longer dictated by the time the paper carrier arrives, as well as the digital form of reading are typically offered at reduced rates, due to the reduced cost of delivery. For any Green reader’s out there it should also reduce the amount of paper that ends up in landfills un-recycled. Having already offered a bailout to the Magazine industry it is hardly a suprise that they would include Newspaper’s as well.

The success of a Newspaper is based on its circulation, how many copies are distributed on an average day, which a major deciding factor in its advertising rates. The Audit Bureau of Circulations is active in many countries with there North American and United Kingdom branches. The Bureau is an independent body offering advertiser’s a way to check that a publisher is delivering the numbers of their newspaper’s that they claim they are. Worldwide there has been a downward trend in circulation for many year’s for the Newsprint industry. Ever since the 1940’s when the Radio was introduced the Newspaper has suffered. This was then followed by the development of Television and then the internet followed suit.

However, in the face of adversity two evening newspaper’s in the United Kingdom managed to post an increase in the latest Audit released. Trinity Mirror’s Liverpool Echo posted a 0.7% increase, and Midland News Association’s Wolverhampton-based Express & Star up 1.5%. Within the United States, as of March 2010, the Wall Street Journal was up 0.5% as well. This made the business orientated paper the only major competitor to post growth, and allowed them to sneak into the number one position. The Wall Street Journal is also among the current American companies producing special editions for the iPad, which appear’s to be already making a positive impact for their circulation numbers.

There has been delays with the release of the Newspaper Subscription Service on the iPad, mainly with the negotiating of contract’s. Apple is asking for thirty percent of the subscription price for delivering the customer’s and managing the transactions. Apple would also like a slightly larger share of the pot with wanting 40%  of the ad revenue, essentially working on commission. The publisher’s dont quite see eye to eye with this, and want to pay Apple a set fee. The publisher’s also want to retain the subscriber information, while Apple wants to keep control of this in iTunes. Publisher’s have observed the potential of the iPad offsetting the losses from the introduction of the competitive medium’s. Regardless of the final contract that is settled on; the new subscription service should breathe new life into the fading print Newspaper industry. Everyone Rejoice!