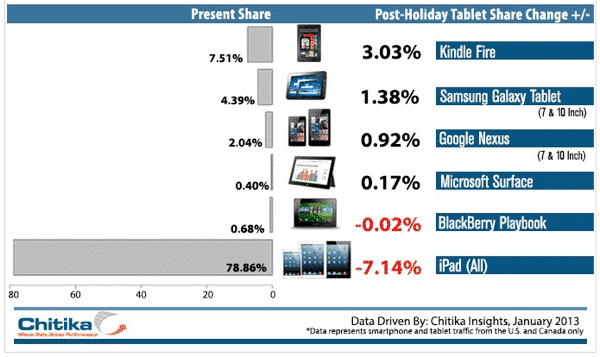 Chitika is a online ad network and data analytics firm. It presents 4 billion targeted ads each month to a network of 200,000 sites. By analyzing the traffic on these sites, it was able to come up with the following figures for December 1st to December 27th. This data is for the US and Canada only.

According to Chitika, the Kindle Fire gained 3% in usage, followed by the Samsung Galaxy tablet (7 and 10 inch) at 1%, Google Nexus at 0.92%, and the Microsoft Surface at 0.17%. The iPad declined by 7%, leaving the iPad with a 79% share of the market. In market share, the iPad was followed by the Samsung Galaxy tablets at 4% and the Google Nexus at 2%. Prior to the Christmas period, Chitka says that the iPad had an 86% market share. The firm expects the iPad to return to the 80% range after the holiday period as users return from vacation and browse with their new devices less frequently.

You can find the report here.