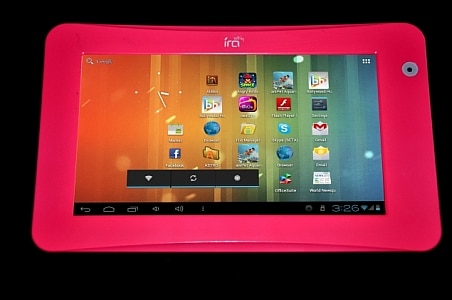 Ira Thing 2 from WishTel is the newest entry on the Indian tablet scene and seeks to entice buyers with its affordable price tag of just ₹6,500. The tablet does not disappoint, running a very current version of Google Android 4.0 ICS! It features a 7 inch display and is powered by a 1.5 GHz processor. It also comes with 512 MB of RAM and internal storage around 4 GB, expandable up to 32 GB. The battery pack with the tablet is rated at 3000 mAh, which the company claims is capable of supporting four hours of browsing time.

A distinct feature of the tablet is its built-in support for 14 Indian languages including Hindi, Marathi, Gujarati, Bengali, Tamil, Kannada, and Malayalam. The tablet will also be available in multiple color options of black, red, yellow, pink, blue, and white.

The Ira Thing 2—weird name for a tablet device, it must be said—is both Wi-Fi and 3G capable and come pre-loaded with e-news and TV apps that provide access to more than 120 TV channels. Then of course the tablet will also serve as an ebook reader as well.

“We have been persistent in delivering the best of technology with our earlier two products – IRA & IRA Thing and are overwhelmed with the responses received from our customers. With the launch of IRA Thing 2, we wish to offer the youth of today, a device that is fun, trendy and offers access to the best of entertainment and education applications at an affordable price,” said Mr. Milind Shah, Chief Executive Officer of WishTel during the launch.