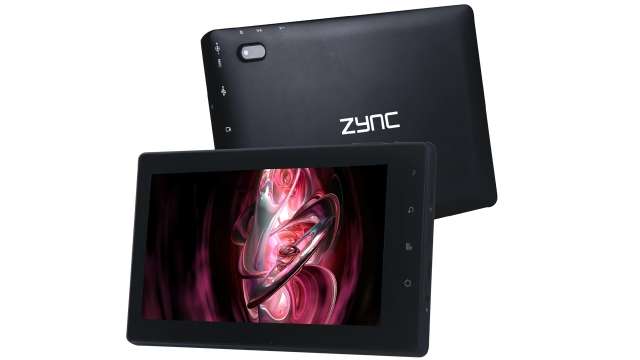 The Noida based Zync Global has set itself a target of selling no less than half a million tablet devices (up from 100,000 it sold last year) in the current fiscal status, and to help accomplish that goal it has launched the Z999 in India. The company has also priced the tablet at an affordable ₹11,990 to ensure greater market penetration.

Powered by a 1.5 GHz ARM Cortex A8 processor, the Z999 comes with a LED based 7 inch 800 x 480 pixel capacitive touchscreen, 8 GB of internal memory (which is easily expanded to 32 GB via microSD cards), 512 MB RAM, front and rear (0.3 and 2 megapixel) cameras, and a USB port. Plus the tablet is also 3G enabled and boasts of other features, such as a HDMI port, Digital Media Reader, Bluetooth v2.1, and Wi-Fi. The tablet gets its juice from a 4200 mAh battery unit and is just 8mm wide, which its makers claim is the thinnest in its segment.

“The tablet market in India are 10 million units in FY2012 and we sold 100,000 tablets… we are confident that given the potential for 3G-enabled tablet PCs, we should easily sell half a million devices this fiscal,” said Zync Global Director Ashish Garg, before also adding: “The tablet market is showing significant growth and we are confident that Zync Z999 will receive a great response from the market.”

The Z999 Plus will come pre-loaded with apps such as browser, movie player, IBibo, BBC news, and Whatsapp messenger.

The company has been feeding the market in India with tablet devices such as the Z909 and Z990. With the Z999 Plus, the company will have competition from the likes of Micromax and iBerry that have also been pushing their low cost feature filled tablets aggressively. Then of course there is the Nexus 7 tablet that is also expected to be similarly priced, but will reach India only around September.