You are here: Home / Audiobook News / Eddie Redmayne to narrate Fantastic Beasts and Where to Find Them audiobook 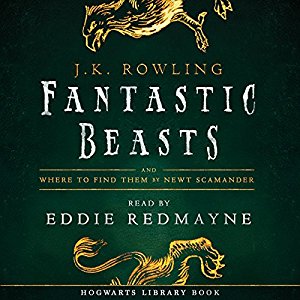 Audiobooks are a billion dollar business and publishers are looking for new ways to introduce readers to the format. Audible has just announced that they are releasing an audiobook of Fantastic Beasts and Where to Find Them, and that it will be narrated by Academy Award-winner and the star of 2016’s film, Eddie Redmayne.

In a statement Redmayne said “Before I was cast in the film, David Yates told me about Newt and this textbook. I found it so funny and so enchanting and really wittily written. But it wasn’t until I started reading it out loud for the audiobook that I realized how tricky and poetic J.K. Rowling’s use of sounds and language can be. There are some really great tongue twister words in here! Occasionally, I had to stop recording just because I was incapable of saying the words without either laughing or getting my tongue in a muddle. I enjoyed the challenge and hope listeners can sense that in my narration.”

The audiobook of Fantastic Beasts is currently available for pre-order for $14.99 and it will be released March 14th, 2017. It is being published by Pottermore, the website that is run by J.K. Rowling.