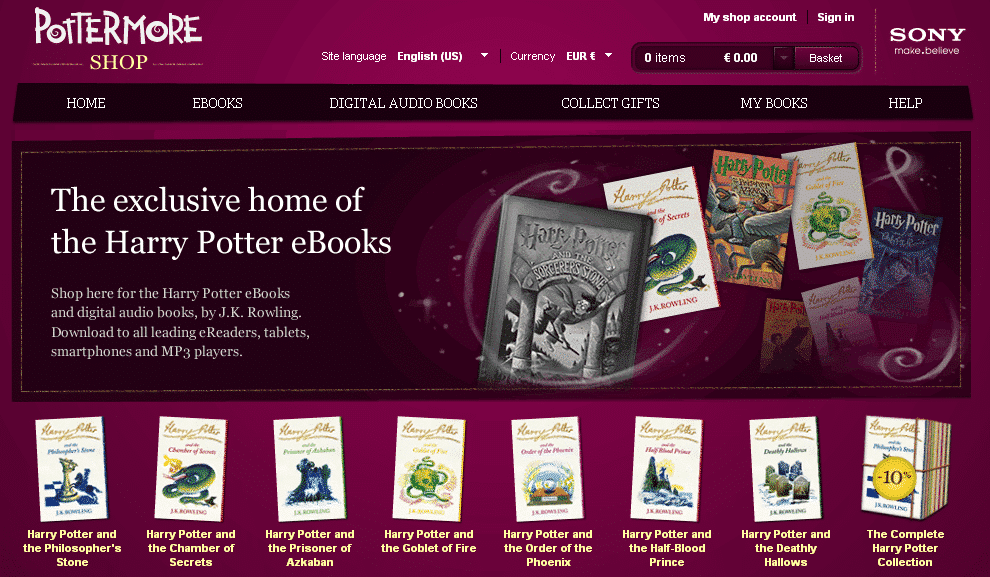 Kobo has just landed a deal for the seven new Harry Potter eBooks. Kobo customers across the globe will have access to them in many different languages such as;  English, French, German, Italian, and Spanish to begin with, and more languages on the way.

The eBooks themselves are not available for purchase with Kobo but instead you are redirected to the Pottermore website. Once you buy the books you can link your Kobo account to the purchase and then easily transfer them to your Kobo e-Reader or many of the Kobo apps on iOS or Android.

This new arrangement with Kobo is of a similar vein to the established relationship that Pottermore has with Barnes and Noble, Amazon, Sony and Google. All of these vendors do not physically sell the digital content but instead send you the  main Pottermore website. This really marks the first time an author has a copious amount of control that major companies are bending over backwards and making their customers visit a 3rd party website to purchase these books.

The entire Harry Potter eBook series is doing tremendously well with a recent report citing that Pottermore raked in over five million dollars in sales in their very first month. The deal with Kobo is a solid one because they have their hands in more markets then most of their competition. This allows many users in Canada, Australia and Europe to easily read the books.

Michael Tamblyn, Executive Vice President Content, Sales & Merchandising, Kobo, commented: “We’re excited to bring together the extremely successful Harry Potter phenomenon and the always-enthusiastic Kobo eReading community. Fans have been waiting for years to see the Harry Potter series in digital and now that wait is over.”

In other Kobo news, their parent company Rakuten invested over 100 million dollars in Pinterest.  The two companies will be working out an arrangement to get photo sharing on the Kobo Vox and integration into their other apps.  Also, be sure to check out the official Kobo Blog where they talk about our website and our review of their new Kobo Instant Reader.