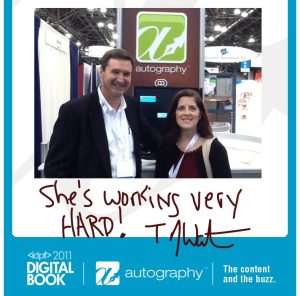 Autography is a new way for authors to digitally sign ebooks using its patented technology. The company is working in conjunction with Open Road Integrated Media to stage a live ebook signing event.

Author Jonathon King will autograph free copies of his Edgar Award winning book the “Blue Edge of Midnight” this Saturday at the Bouchercon Mystery Conference in St. Louis, MO.

Autography’s e-signing technology works across all major eReader platforms and applications. In addition to special graphics just for Bouchercon, the signature page can also feature a picture with the author that is also inserted into the attendee’s ebook. The now personalized greeting can be exported to Facebook or Twitter with a single button if they choose.

This event is to draw attention to the new way of autographing ebooks and to try to attract new vendors to the project. Autography has been making the rounds at various industry events in an attempt to woo prospective investors and get more publishing partners on-board. The more authors they can get signing Kindle books and other book formats, the more synergy the industry builds between authors and their audience.

The great aspect on Autography software is that it can be done either in person or online. When we tested the software at Book Expo America earlier on in the year, we got a picture of Mercy with the CEO Tom Waters. If you want to learn more about ebook autographing systems, check out the Good e-Reader Radio show where we talked to both Autography and Kindle Graph.