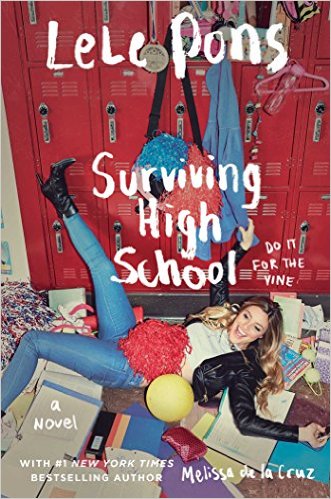 Vine Superstar LeLe Pons was offered a lucrative contract from Simon & Schuster to publish a book. Her debut novel is called Surviving High School and will be hitting store shelves April 5th 2016 and available as an e-book. S&S is betting Lele could leverage her ten million followers to sell more books than YouTube sensation Zoe Sugg.

Lele Pons is Vines poster child and flag bearer. She recently reached ten million followers and 7.6 billion loops, making her the #1 most watched person on Vine. She has been nominated for three Teen Choice Awards, a People’s Choice Award, and a Streamy Award and featured in Vanity Fair, The New York Times, Teen Vogue,Time magazine, and more. In 2015, she was invited to the White House to create Vines to support the First Lady’s campaign for disadvantaged kids to go to college.

Her book is autobiographical in nature and tells the tale of her coming to a new school and sitting alone at lunch, until her self-deprecating Vine’s begin to get some serious attention. All of a sudden everyone wants to be her friend and she has to juggle her sudden fame, alongside high school drama and trying to be a diligent young scholar.  Lele also talks about her relationship with Twan Kuyper who is also crossing over into the mainstream, with his recent involvement with the Ryan Seacrest New Years Special.

Publishers have been falling all over themselves the last two years trying to secure the rights of young superstars who have made a name for themselves on social media networks. They tend to focus on YouTube because its easy to measure how many subscribers and follows they have. This has resulted in huge book deals being offered to people like PewPewDie, Shane Dawson, Connor Franta, Joey Graceffa, and Justine Ezarik.

S&S investing in LeLe Pons marks the first occasion that someone from Vine has been offered a major book deal. Like most young starlets, she did not write the book herself, but it was penned by Melissa de la Cruz. In order for the book to be autobiographical in nature, Lele and Melissa spent a lot of time together, where Lele basically disclosed her life story.

Surviving High School is going to get a ton of publicity in the coming days and Good e-Reader is proud to be the first media outlet to write about this story.