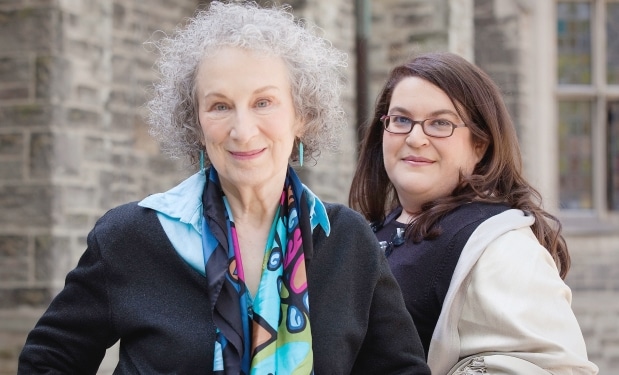 Margaret Atwood is joining forces with fellow novelist Naomi Alderman to debut serialized Zombie Fiction. The new project is entitled “The Happy Zombie Sunrise Home” and will be issued in thirteen different installments. This is a WattPad exclusive and can be downloaded for a myriad of platforms, including Android. The first three chapters have been officially unveiled today and you can check them out HERE.

Atwood is best known for award winning titles, such as The Edible Woman and The Blind Assassin. Atwood has garnered many awards, like the Booker and Giller Prizes for her writing. She teamed up with a young British Author by the name of Naomi Alderman for this zombie project. This was due to the Rolex Mentor and Protégé Arts initiative, which pairs a young artist and an established artist together to work on a collaborative project over the course of the year. The dynamic duo is basing the entire Zombie Apocalypse story in Canada, which is often neglected by the rampaging hordes of undead.

“We are so proud that Margaret and Naomi chose Wattpad as a way to quickly and easily share this work with a global audience of millions,” Wattpad CEO Allen Lau, the Canadian high-tech entrepreneur who launched the storytelling website in 2006, said in announcing the authors’ new zombie novel. “They both understand the new patterns of engagement that are happening around serially published stories,” he added. “The majority of people on Wattpad are reading on their mobile phones, so we believe there is a great fit between serialization and today’s mobile-first, social networked culture. The chapter-by-chapter model is something that is helping many writers connect with readers to find success.”

The entire series is due to be completed by early January 2013 and is worth checking out if you are enamored with zombie fiction.