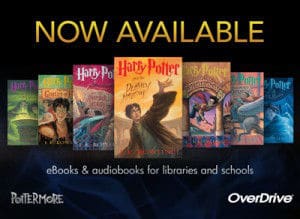 Softlink is the leading content distribution system in Australia and formed a relationship with Overdrive last year to bring digital eBook lending to schools and libraries. Softlink announced today that they are now offering the entire line of Harry Potter eBooks in Australia.

Following the Harry Potter lending announcement last month, Softlink has keenly anticipated the release of the Harry Potter digital titles on OverDrive. “So far, we’ve seen a tremendous amount of interest in the OverDrive service since it was made available last year,” said Mr Hillary Noye, Softlink’s Director of Business Development Asia Pacific. “The success of OverDrive demonstrates the importance of offering 21st Century information solutions to students and the addition of Harry Potter will only accelerate its use. Softlink is proud of our partnership with OverDrive as we continue to align our services with the latest in educational technology.”