You are here: Home / Bookselling News / This author is surrounded by armed guards 24/7 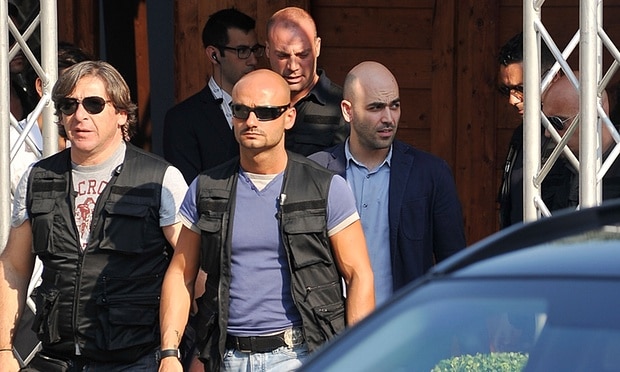 Roberto Saviano lives his life surrounded by a phalanx of armed guards 24/7 and never stays in the same location for more than a few days. This is primarily due to the breakout success of Gomorrah, which cataloged the psychopathic brutality of the Italian mafia.

Things weren’t always this bad for Roberto. According to Saviano, when Gomorrah was published in 2006 local mafia bosses “would actually give copies of the book to each other as gifts, with pride.” But pride gave way to vengeance when Gomorrah became a global phenomenon, selling 10 million copies worldwide. This author is one of the few with over one million legit Twitter Followers.

Saviano has spent his life on the run for over ten years and even has highly trained protectors are worried about keeping him safe. His new book entitled ZeroZeroZero blends prodigious research with conjecture. It ranges freely over decades and continents, offering a dizzying catalog of vivid characters and horrible acts. It details the sadistic ethos of violent narco cartel enforcers — from Los Zetas, the gang formed by deserters from the Mexican Army, to the Guatemalan gangs made up of former members of the Kaibiles, the nation’s elite counterinsurgent forces.

This book goes into more detail on the South American and Mexican drug trade than you will ever learn from ere is a book that speaks what must be told at the end of another year of drug war spreading further and deeper, that tells what you will not learn from television shows like Narcos or Breaking Bad.

These days we hear a lot about the about the pros and cons of legalizing drugs, but there is precious debate about the narcotics industry or the political economy. His book juxtaposes the cartel as corporation, corporation as cartel; cocaine as pure capitalism, capitalism as cocaine.

“Cocaine becomes a product like gold or oil,” he states “but more economically potent than gold or oil. With these other commodities, if you don’t have access to mines or wells, it’s hard to break into the market. With cocaine, no. The territory is farmed by desperate peasants, from whose product you can accumulate huge quantities of capital and cash in very little time.

“If you’re selling diamonds, you have to get them authenticated, licensed – cocaine, no. Whatever you have, whatever the quality, you can sell it immediately. You are in perfect synthesis with the everyday life and ethos of the global markets – and the ignorance of politicians in the west to understand this is staggering. The European world, the American world, don’t understand these forces, they don’t have the will to understand narco-traffic.”

Surrounded by armed guards 24/7 is taxing for the author. In a recent interview he illuminated us with his day to day life. “For the last eight years, I have traveled everywhere with seven trained bodyguards in two bullet-proof cars. I live in police barracks or anonymous hotel rooms, and rarely spend more than a few nights in the same place. It’s been more than eight years since I took a train, or rode a Vespa, took a stroll or went out for a beer. Everything is scheduled to the minute; nothing is left to chance. Doing anything spontaneous, just because I feel like it, would be ridiculously complicated.”

Many aspiring writers dream of a lucrative publishing contract and a huge audience, Saviano has this but everything else is gone: the chance of a normal life, the chance of a normal relationship.  If he wants to visit the US or do a book tour it has to be planned out 11 months in advance. Maybe this new book he wrote will be his last, the narcotics industry is worth trillions of dollars and many of the key players are celebrities on the local level, but do not want to be known internationally. The question is, is the drug industry worried about the author or the readers?