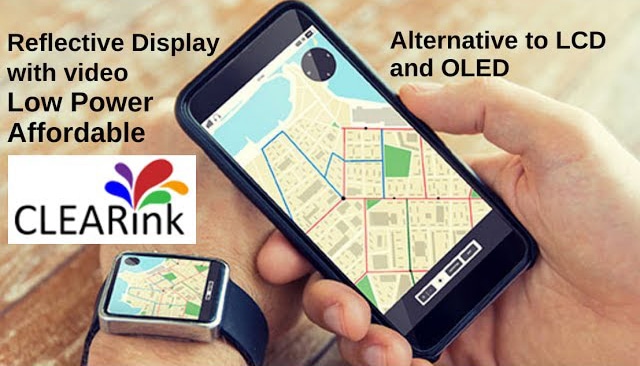 ClearInk has just won Best in Show at SID Display Week and the underlying technology might be integrated in e-readers and smartphones in 2018. The technology is based on invention from the University of British Columbia and it offers tremendous performance, does not need much power and has the advantage of using low cost color filters atop the monochrome display to create a truly reflective color display.

Sri Peruvemba the head of marketing at ClearInk told me that “The demo units that were displayed at SID are 212 DPI and could display 4096 colors, but this is because the company used existing TFT purchased from a retail product and reused the backplanes, this technology lends itself to any resolution available on a TFT backplane, the white state reflectance is 83%, the black state is 2.5%, refresh is 33 frames/second, uses 5V compared to thrice that voltage with other technologies. All of these are on the hand built samples and the units that will roll out of the factory will have better specs. The company can make bistable and video capable ink, both low power.”

He went on to say “The top plane has two parts to it, there is a film with unique microstructures that allow light to be totally internally reflected and creates the white state, the second part of the top plane is an electrophoretic layer where charged black particles can be moved to the bottom of the microstructures or moved away. When the black particles adhere to the bottom of the U shaped microstructures, light is absorbed producing the black state. Since this is based on just one particle, the movement is fast and the particles travel a very short distance thereby giving this technology the ability to offer video. The demos shown at DisplayWeek this past week were running video at 30 frames/second, the white state reflectance was over 80%, we showed that off-axis viewing was excellent.”

“The products demonstrated were prototypes built in the lab. This product can be made in a fully depreciated LCD fab and that trial manufacturing has commenced already and we expect to have samples in the near future. Mass production is scheduled for early 2018. Customers have already paid licensing fees to build product. First set of targeted applications are eSchoolbooks, Wearables and other mobile devices. We will follow this with signage and ESL products.”