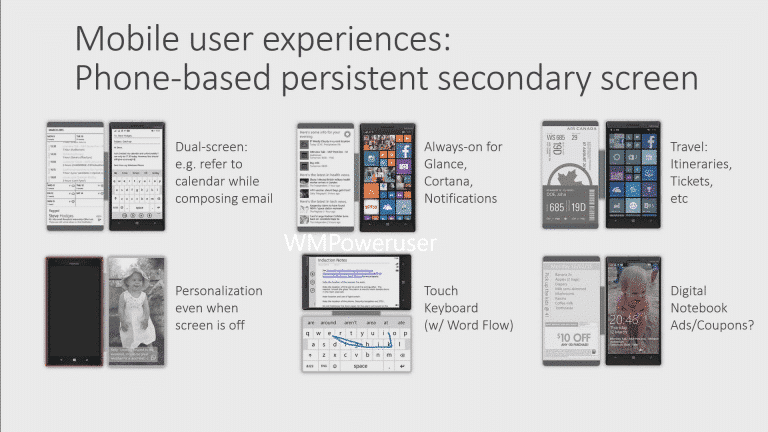 Microsoft Research is currently in deep talks with the Lumia team in Finland to develop a secondary e ink screen inside of the Flip Covers. Microsoft said they were aware of devices such as the YotaPhone, but decreed that it suffered from usability issues and they would never build a screen into the phone itself.

It looks like Microsoft is interested in having a secondary screen to work in conjunction with your primary screen. One of their big projects right now is to get common Office tasks functioning correctly. For example, you can be writing an email and the E Ink screen will show the Outlook calendar.

The possibilities with an e Ink screen are virtually endless if Microsoft can properly code in everything they want. If you take a look at the concept image at the beginning of this post you will notice a number of social media feeds, such as Facebook. It also looks like Microsoft wants to display Cortana notifications as well.

According to Bloomberg, Microsoft wants to revitalize their research division and create viable productions. “Microsoft is in a race with Google and Facebook to establish the strongest hold over people’s digital lives. The changes at Microsoft Research resemble how its younger Silicon Valley rivals have operated for years. “Microsoft totally separated its research arm from the rest of the company and almost made it optional to contribute to the rest of the company,” said Ahmad Abdulkader, an engineer on the applied machine learning team at Facebook who previously worked at Microsoft and Google. “Google took the exact opposite approach.”

Google researchers work very closely with product groups, and almost everything they produce is visible to the rest of the company, said Jeff Dean, a senior fellow at Google. “We don’t have this really isolated group that is doing stuff without any regard to what might be useful in products,” he said. “We have this very porous connection between research and products.”

Many people around the industry agree that Microsoft most promising research never made its way into the company’s products until a rival built something similar. This is an issue Microsoft really wants to solve and I think their e Ink flip cover screen is just the start.