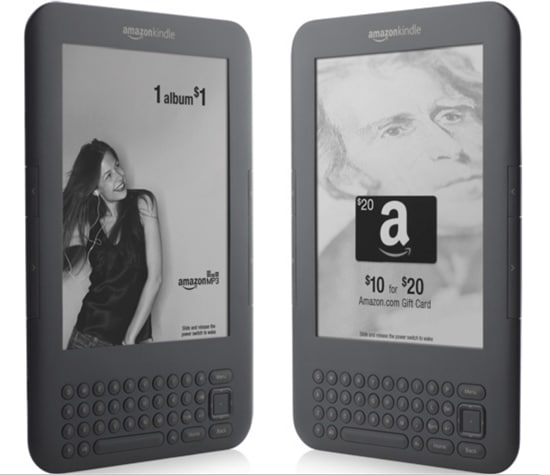 Amazon has just unveiled a new edition of the much beloved Kindle 3 WIFI for $114! This is not a new e-reader per say, but it is mostly supported by on-screen advertising. This new one is called the Kindle ‘Special Offers’ and will be out May 3 2011.

Not only is the new Kindle 3 WIFI more cost efficient than the other e-readers the company offers, it comes with some added benefits. There is a new program called “Special Offers” where customers can get access to weekly deals via a new special menu. Current and future offers include; 10 for $20 Amazon.com Gift Card, 6 for 6 Audible Books (normally $68), $1 for an album in the Amazon MP3 Store and more.

This advertising project centered around the approving of screensavers from a community point of view is the fruit of the recent Amazon purchase of  coupon site Living Social. They spent 178 million on this Groupon competitor and the company hopes that the quality of the deals it offers will end up being a welcome intrusion rather than a nuisance.

We got our hands briefly on one of the new review editions of the Kindle Special Offers edition and it seemed when you powered it on you saw a bunch of adds pop up, but this was circumvented by hitting the home screen twice. You then see a small add that is constantly on the bottom of the screen.

It is interesting to see that the price was only reduced by $25.00 for a lifetime of viewing adds. Amazon commented that they were not ready to go below $100.00 yet, because this is a new project built from the ground up. Hopefully with the success of this new advertisement model for the Kindle and the attraction of major sponsors it could possibly drive the price down in the coming months.

What do you guys think about the new Advertising model that Amazon is showing off? Do you think people would rather save $25 and get adverts on their screensaver and have special offers pop up on them?