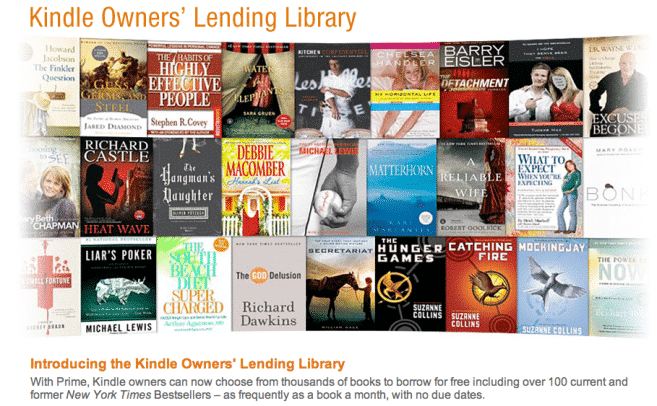 Amazon rolled out a new system last year for people who belong to their exclusive Prime Membership. Every month you can download and read one full ebook on your Kindle Fire or via the website. The company reported today that their selection of books available for loan has topped 100,000 different selections.

“Kindle Owners’ Lending Library continues to grow rapidly – with over 100,000 titles, customers can choose to borrow a variety of breakout, best-selling titles for free, including ‘Nobody’ by Creston Mapes, ‘The Walk’ by Lee Goldberg and ‘Abducted’ by Theresa Ragan, as well as Kindle Singles from best-selling authors Andy Borowitz, Karin Slaughter and Mishka Shubaly,” said Russ Grandinetti, Vice President of Kindle Content. “It’s also become a meaningful way to grow royalties for authors like Patricia Hester, who sold less than 200 books in 2011 prior to joining KDP Select and has now earned over $36,000 from KDP Select in one month as readers have discovered her books through this service.”

Since the service initially launched in November 2011, it has grown in leaps and bounds. It is a testament to the philosophy that if it is free people will eat it up. There are no limits of how often a single book can be borrowed from Amazon and popular books like the Hunger Games remains perennial favorites.

Show Press Release (588 More Words)
SEATTLE—February 29, 2012—The Kindle Owners’ Lending Library continues to grow rapidly, now offering more than 100,000 books that Amazon Prime members with Kindles can borrow for free—including over 100 New York Times Best Sellers like The Hunger Games trilogy—as frequently as a book a month, with no due dates.

Patricia Hester, a semi-finalist for the 2009 Amazon Breakthrough Novel Award and author of The Clover Mystery Series, was one of the top ten KDP Select authors in January, earning $5,850 from the KDP Select fund. She also earned over $31,000 from paid sales of her books enrolled in KDP Select. “After a year of marketing ‘Whispers from the Ashes’ in book clubs, genealogical magazines, and local newspapers with steady, but slow results, I joined the KDP Select program,” said Hester. “The results have been absolutely amazing – I have now accomplished every author’s dreams: worldwide interest, fan enthusiasm, and wonderful sales. Thank you KDP Select!”
After joining KDP Select and adding her A Modern Witch Series and other books to the Kindle Owners’ Lending Library, Debora Geary’s royalties from paid sales grew substantially from December to January, and she earned an additional $9,600 from the KDP Select fund in January. “I published my first book via KDP just over a year ago, and since then, I’ve been struck by Amazon lightning of the best kind,” said Geary. “Finding readers is often the hardest part of an author’s journey, and the KDP Select program has been a phenomenal way for me to reach them.”

In January, independent author Terri Reid, author of several paranormal mystery books, earned over eight times more money from paid sales of her KDP Select books compared to the month before she joined KDP Select. She also earned $8,000 from the KDP Select fund in January. “KDP Select has added a wonderful boost to my sales – many new readers have written to me mentioning they have borrowed my first or second book and then purchased the rest of the books in the series,” said Reid. “I’ve also found that the ability to offer my books for free has brought my sales to a whole new level. I highly recommend the KDP Select program.”