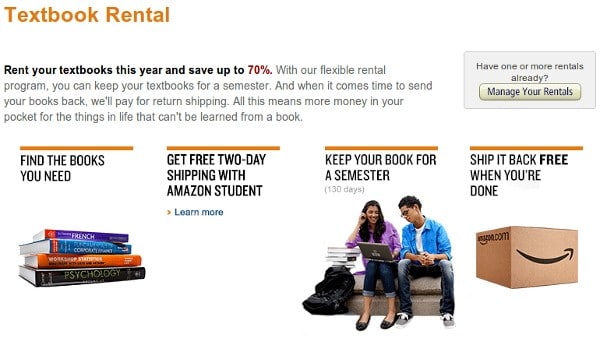 Amazon has been lending out digital textbooks for over a year now and diligent young scholars could save between 30% to 60% by renting them, instead of buying. Due to the success of the digital strategy, Amazon has just implemented a new program to lend out physical textbooks as well.

The new textbook rental system allows students to borrow books for a quick semester, which is 130 days. If you need the book longer you can pay a few extra dollars to borrow it for a longer duration. The average price of borrowing the book is between $30 to $60, which is far more affordable then purchasing them flat out for over $100.00 or more.

If you are the type of person that loves to draw in your textbooks or if stress makes you take a bite out of it, it’s wise to control yourself. If you damage the book, Amazon said that they will charge you the full price at the end of the semester.

This new program is rolling out as a USA exclusive and rates are comparable with Chegg, Kno, and Coursesmart.