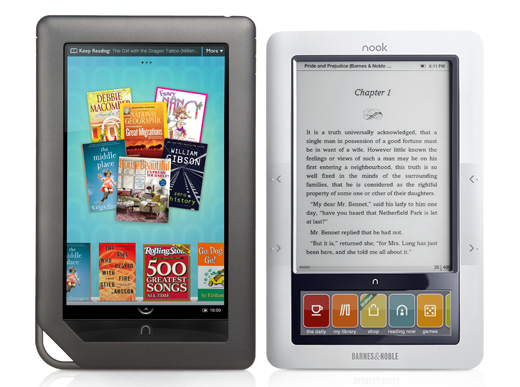 Barnes and Noble unveiled today the latest edition to its e-Reader arsenal with the new Nook Color touch screen e-reader with a price tag of around $249.

The announcement today by Barnes and Noble with an over the top press conference. It includes dancers, and actors playing out a storyline that promoted digital ebooks. Ironically this announcement of the Nook Color came 1 year after the press conference for the original Nook 3G.

Now lets talk turkey! The Nook Color runs Google Android 2.1 OS and has a 7 inch full color touch screen. Packed on this screen is the ability to display up to 16 million colors, so color ebooks will look very good! The Resoltion on the Nook Color is 1024×600. The screen itself is made of a new Laminated film (Vividview) that reduces glare from the sun.

Other hardware features include, integrated 8 GB of internal memory and an SD card slot, upgrading the memory to up to 32 GB. The internal battery is said to last for around 8 hours of use. It will also come with WIFI but no 3G is available. It also features a 3.5mm stereo headphone jack and a micro-USB port.

Now lets talk content! One of the big things being hyped by Barnes and Noble is the ability to grab magazine subscriptions with the new Nook Color. Currently there are around 100 different ones you can subscribe to such as Elle, US Weekly, Cosmopolitan and more. It will also read ebooks such as EPUB, PDF, TXT and Microsoft open office formats. For audio, it can play MP3 and for videos MP4.

Speaking of ebooks, with the Nook Color you can really tailor the e-reading experience. You can do everything from changing, fonts, texts, margin size, background color and more! You can even highlight a word, and look it up via Wikipedia or Google. While reading the ebook, you can share select passages with friends on Twitter or Facebook, you even have the option to recommend a book to a friend. One of the most important facets that really make this e-reader great, is the ability to display interactive ebooks. At the conference today, they showed off various cooking books, that had not only the recipes but videos that showed you how to do each step.

Now that we talked about ebooks from grownups, what about Kids? Barnes and Noble has released a new Program called Nook Kids. They will soon be offering a dedicated library with interactive childerns books. You will even have the option to turn on/off a narrators voice, so if your child is reading on their own already, you can turn off the companions voice.

The NOOKcolor will come pre-loaded with a ton of extras right out of the box, including a full Web browser, free word games and chess, Pandora, internet radio to stream tunes from favorite artists over Wi-Fi while reading, Quickoffice to view Microsoft Office files, and more. Nook Color will not have access to the Android market, but Barnes and Noble is releasing an SDK soon called Nookdeveloper.

Although the new Nook Color is not e-ink based, which might turn off some e-reader patrons that have already purchased the Nook WIFI, or the Nook 3G, it opens up an entire new market for Barnes and Noble. Being the nations largest retail chain, they have a TON of ebooks available. In conjunction with magazines and news paper subscriptions, it could possibly not only give the iPad a run for its money, but also provide to be viable competition for the maelstorm of low budget tablets coming out.

The Nook Color will be priced at US$249 and will start shipping by Nov. 19. It will be available at Shop e-Readers, Best Buy and Walmart as well as Barnes & Noble itself.