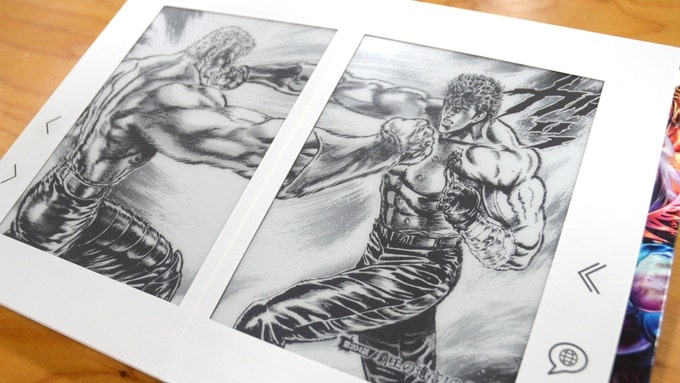 Japanese manga comics have drastically grown in popularity year-over-year, accounting for $3.91 billion in physical and digital sales in 2016. Of that total, digital manga alone represented $1.28 billion. While the sales of eBooks have stabilized in some markets, the Japanese market has seen steady growth. Japan’s Research Laboratory of the Publishing Science revealed that the eBook market increased by 13.2 percent in 2016, totaling 25.8 billion yen in sales. This has prompted the development of a new dual screen digital manga reader called eOneBook.

E Ink has directly partnered with Progress Technologies Inc., a technical service for design development, to bring E Ink’s ePaper modules to a first-of-its-kind E-Manga solution, the eOneBook.  The eOneBook solution is made up of two 7.2 inch e-paper screens that are enclosed in a paper casing, resembling the desired look and feel of a paperback comic book. The device features both Japanese and English language settings, the ability to loan comic books to others and is expected to ship in April, 2018 with a planned retail price of 37,800 Japanese Yen or 28,000 Yen on Kickstarter. It ships both to the United States and Japan.

“With the increasing popularity of manga comics, avid readers are clamoring for a convenient solution that can store their collections in one location for easy, on-the-go reading. However, they have found that current market options do not offer the same benefits that only their paper counterparts can provide,” said Mr. Toru Konishi, Executive Director at Progress Technologies. “Typical LCD screens often distort or fail to convey the fine details of comic book art and many readers experience eye fatigue after long periods of staring at the screen. To address these issues, we saw an opportunity to partner with E Ink to use their ePaper technology to create a solution that could house an entire manga collection on one device, while preserving the experience of reading a paper comic book.”

“As we have seen with many of our applications, customers choose E Ink technology because it gives the sense that they are reading actual paper,” said Dr. Paul Apen, Chief Strategy Officer at E Ink. “With manga comics growing at such a rapid rate, we knew that this was a market we needed to enter and felt that our displays provided a natural fit. We are excited to collaborate with Progress Technologies to create a unique device that uses our advanced ePaper technology, while mirroring the appearance of fans’ favorite comic books.”