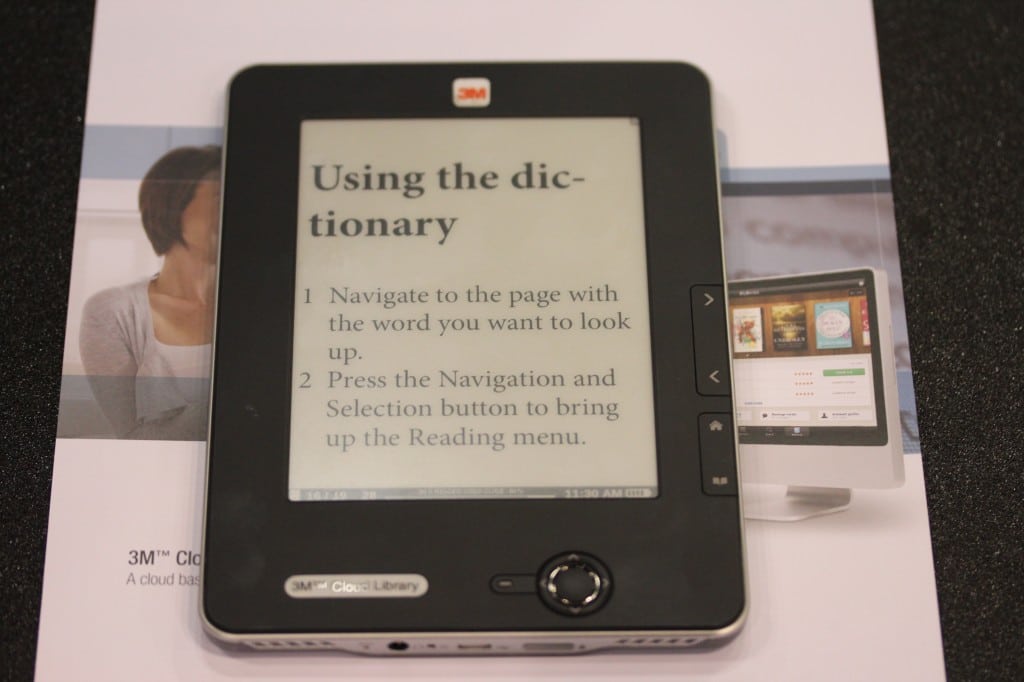 At Book Expo America 2012 we spoke with Tom Mercer, the man in charge of business development of the new 3M Cloud Library. The new program first started off with the St. Paul Library and provided library patrons with a myriad of very intuitive options to facilitate borrowing digital books. The first major innovation was the Discovery Terminals, touchscreen displays with custom hardware and software. They allow users to browse the entire library’s database of books in their system and allows them to check out books onto their tablets or other computers. The second major factor are the e-readers they provide for the libraries. A small segment of people have the disposable income to afford an iPad, and many don’t have a smartphone. 3M gives libraries a number of e-readers to lend out to their patrons. There has been some confusion regarding who made the e-readers and how Txtr was involved in the whole process, and we now have firm details.

3M had invested in Germany based Txtr last year, which helped give the company added resources for research and development. It also allowed 3M expand into other European Markets. Many rumors initially swirled when 3M showed off early prototype devices that bared a striking resemblance to the cancelled e-reader that Txtr had developed, before they switched to a purely digital distribution model. The role Txtr played with 3M’s Cloud Library system was the development of ita Android App for smartphones and tablets! Txtr has a ton of experience with their own apps on the Google Android platform and instead of building something from scratch, 3M had Txtr develop the infrastructure for them, based on their previous experience.

The second part of the breaking news to come out of this interview was the e-reader that 3M provides to libraries. When we were shown the final product today, it is a re-branded Pocketbook 612. It does not have WIFI, but has the exact same user interface and hardware design. It has twin speakers, 3.5 mm headphone jack, and a six inch Vizplex display. We have spent a ton of time on various Pocketbook e-readers over the years and it really was evident as soon as we saw it. Now to be clear, 3M has not partnered with Pocketbook, but they are dealing with the very same Chinese Manufacturing Plant as Pocketbook does.