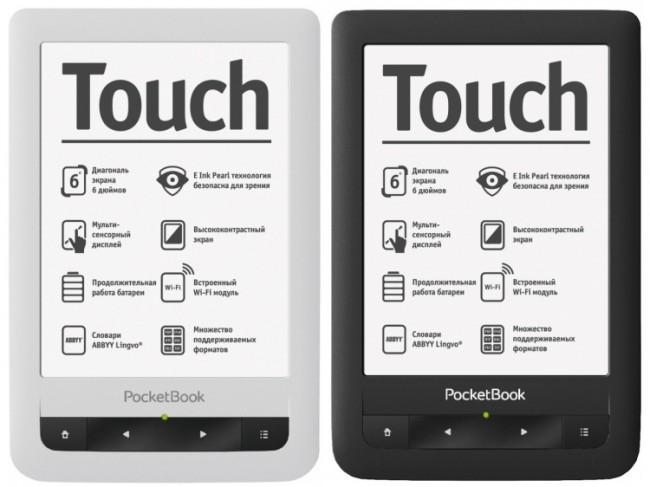 Pocketbook has revamped their lineup of e-readers with a new six inch offering that is a step in the right direction for the beleaguered company. It has been officially revealed in the Ukraine, where the headquarters is based, and should make a trip to North America by the summer.

The Pocketbook Touch 622 features a six inch e-ink Pearl display with a resolution of 800×600 pixels. Honestly, the resolution is standard fare, but we should see a boosted response time with them using e-ink pearl for their display screen. The processor seems rather solid at about 800 MHZ, which puts it on par with most of Amazon, B&N, and Sony`s current offerings. There is a paltry 128 MB of RAM and 2 GB of internal memory. Like most Pocketbook e-readers, you can enhance it up to 32 GB via the Micro SD card.

Pocketbook e-Readers are not very new user friendly. Their only source of content is the `Book World` ecosystem they run with a ton of free books available in 12 different languages. They are mainly Project Gutenberg books that have mostly been scanned. This brand of device is popular with geeks because it allows a copious amount of different ebook formats to be read. It currently is able to read EPUB DRM, EPUB, PDF DRM, PDF, FB2, FB2.ZIP, TXT, DJVU, HTM, HTML, DOC, DOCX, RTF, CHM, and TCR. If you are an avid user of Calibre, you will find no shortage of books online to load in your device. It also plays nice with PDF and ePub books via Adobe Digital Editions.

This device is tipped to hit the Ukraine in March for around $200 to $300, which is mostly in line with Pocketbook’s ridiculously inflated prices. That kind of money might fly well in Eastern Europe, where there is not a ton of competition, but this is normally why the company flies under the radar in North America. Overpriced, under-performing, and no marketing budget to make a dent in the larger companies’ market share. The hardware specs might seem fine, but I don’t think this device will do very well in the USA or Canada.