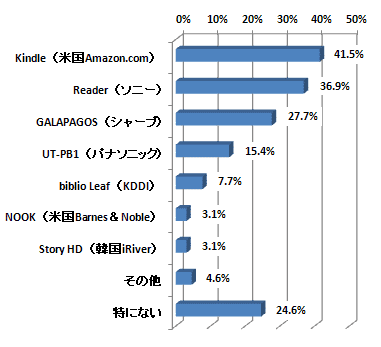 Goo Research has compiled a new report that gives an indication on how e-readers and ebooks are doing in Japan. Between the 2nd and 5th of July 2012, 1,078 members of the Goo Research online monitor group completed a private internet-based questionnaire. 52.8% of the sample were male, 16.7% in their teens, 17.4% in their twenties, 21.6% in their thirties, 16.1% in their forties, and 28.1% aged fifty or older.

The first question asked if you had ever read a book, magazine, or newspaper in digital format. 35% of the respondents said they they had, while 27% said that they have not, but wanted to. A further 37% said they had no interest at all to consume digital media, in any form.

The next question gave some insight on how residents in Japan view major brand name e-readers. It seems that Amzon, Sony, Sharp, and Panasonic lead the charge with the most dominant market presence.

Kobo recently launched its touchscreen e-reader in Japan during the course of the last month. It will be interesting to see how its footprint increases, because they never even made the poll.