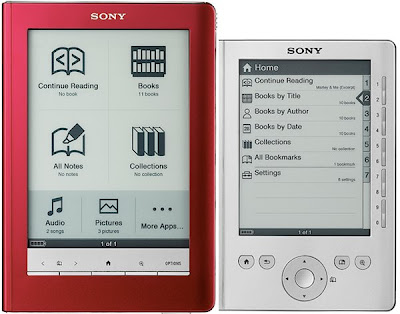 The latest Good E-Reader News has Sony raining on iPad’s parade in Japan with an announcement that Sony is working on a new E-Reader and content distribution system to make a play at the hot overseas market.

Sony said it will set up a planning company on July 1 for the content distribution service and will hold 25 percent of the firm. KDDI Corp, Toppan Printing Co, and the Asahi Shimbun newspaper will also hold 25 percent each.

The move comes a day before the launch of the iPad in Japan and other countries outside the United States, where print media face a steady decline in advertising and have turned to e-readers as a chance for new revenue.

“People’s awareness of e-Books here has been enhanced rapidly,” Fujio Noguchi, senior vice president of Sony Electronics of the United States, told a joint news conference with his three partners.

“A big wave of e-Book businesses has been swelling around the world, and the tide has spread from North America to Europe and Asia,” Noguchi said. “This year will be defined as the first year of eBooks. Time is ripe.”

The Japanese electronic book market is now estimated to be worth 46 billion yen (about 500 million dollars), with most titles distributed via mobile telephones and conventional computers.

Sony attempted to get into the Japan market in 2007, but quickly withdrew due to lackluster sales. The introduction of digital devices that enhance the reading experience has heightened global interest in digital publishing. By utilizing their technologies and knowhow, the four participating companies aim to create an environment where publishers and newspapers can assuredly provide digital content, and plan to build one of the largest eBook distribution platforms in Japan.

Currently Sony enjoys tremendous success in North America, where its line of E-Readers are in many retail settings, and are the subject of Impulse buys at many Electronic Stores.