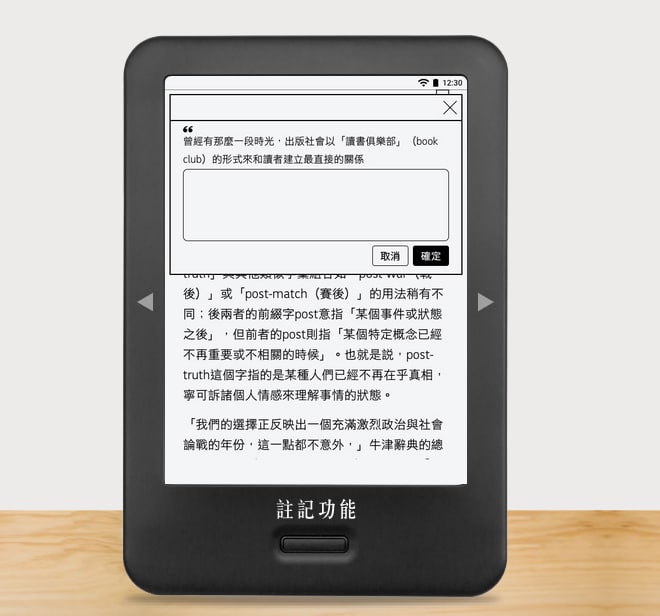 The Readmoo MooInk was officially unveiled at the E-Ink booth at Touch Taiwan 2017. This eReader has the best refresh rate that I have ever seen and E Ink has stated that it is as robust as an LCD touchscreen panel.

The MooInk features a six inch E Ink Carta display with a resolution of 1440 x 1080 and 300  PPI. It is employing a Freescale IMX 6ScololLite @ 1GHx + GPU, 512MB  of RAM and 8GB of internal storage. It has an SD card capable of reading 32GB worth of expandable storage. It also has a front-lit display with eight LED lights on the bottom of the bezel that project light evenly across the screen.

It has a physical button on the bottom of the bezel that is used as a home button or to go back a menu. It has the same capacitive page turn buttons as the Amazon Kindle Voyage employs. It can read Chinese, Japanese ebooks in EPUB. The menus can be changed to suit your native language.

Readmoo operates a fairly large digital bookstore in Taiwan. They have digital magazines, eBooks, manga, newspapers and a host of other content that you can buy on their website or directly on the MooInk e-reader. Everything is stored in the cloud, so whatever you buy on the e-reader can be viewed with the Readmoo app for Android or iOS.

The video below shows the MooInk in action. You can see that the page turns are super quick and I fail to see a single full page refresh. This reader is available to pre-order right now for $136 and will ship by the end of the year. I have reached out to the company to see if they can send me a review unit.