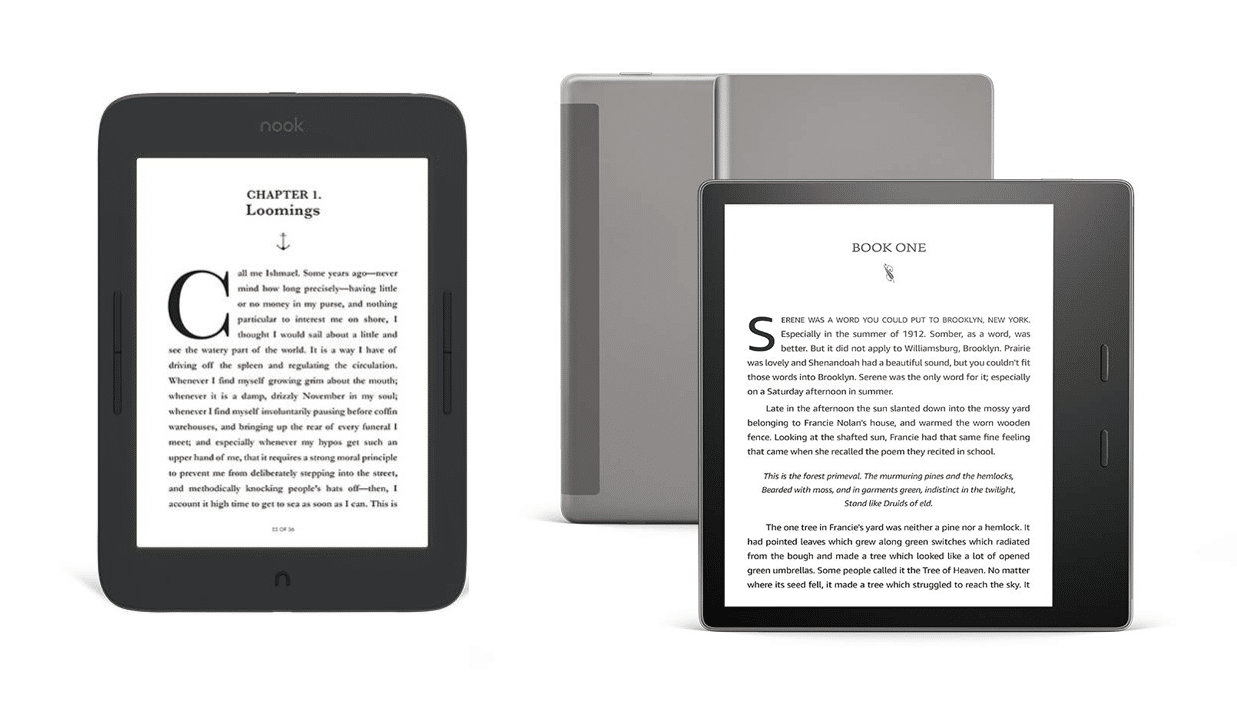 The Barnes and Noble Nook Glowlight Plus and Amazon Kindle Oasis 3 are two mainstream large screen e-readers. They have tremendous retail visibility in the United States, although the Kindle is more readily available internationally. These devices both have a glowlight and color temperature system, this allows readers to read at night and mute the bright white screen with amber LED lights. If you are in the market for a new e-reader, which one is better?

The new Nook is waterproof with IPx7 certification, which allows the device to be submerged in 3ft. of water up to 30 minutes. Whereas the Kindle Oasis has IPX8, which can be submerged for a longer period of time.

The Nook is powered by a Freescale Solo Lite IMX6 1GHZ single core processor, 1 GB of RAM and 8GB of internal storage. The Oasis 3 is employing a Freescale/NXP IMX7 dual core 1 GHZ processor, 512 MB of RAM and has two storage options available  – 8B and 32GB.

The Glowlight Plus 7.8 has an 3.5mm headphone jack, but it is not for audiobooks. Although B&N does have an audiobook store for Android, they made the call not to include it on an e-reader. Instead it will be used to access the various Podcasts that Barnes and Noble produces. They tend to interview famous authors and literary figures every week or two.  The Oasis has Bluetooth for wireless headphones or a speaker and has the Audible bookstore in select markets. You can buy and listen to audiobooks.

The Nook has two page turn buttons on the left and right side of the screen. The Kindle has two capacitive page turn buttons and the gyroscope can ensure that left-handed people can use the device too. There are two ambient light sensors above each button, this is used for the automatic front-lit and amber lighting system to adjust itself, based on your environment.

The Oasis has a premium feel, the screen is made of glass and it has an aluminum body. The Nook is made of plastic and has a sunken screen. I believe the Oasis has a better overall industrial design, although it is very asymmetrical.

If you live in the United States, the Nook is a great e-reader. It is the first large screen e-reader the bookseller has ever released. The Nook store has all of the modern bestsellers you would expect to find in their retail bookstores. The Kindle has the largest ecosystem in the world, they have the same mainstream bestseller list, but Kindle Direct Publishing has hundreds of thousands of self-published ebooks. You can also subscribe to Kindle Unlimited and Prime Reading is available to anyone that has a current Prime Membership.

The Nook Glowlight Plus has the same name as a previous generation e-reader that was released a number of years ago, this has created customer confusion. If you Google for this device or search Youtube, you will inevitably find comparisons and reviews for an outdated product.  I guess that is why all of the time we write about it, I make sure to point out it has a 7.8 inch screen and came out in 2019. Amazon always bills their Kindles as the “All New,” they do not maintain a numerical naming convention. The Oasis 3, or all new Oasis or the 10th generation product lineup is what all of the writers and bloggers are calling it.

In end, I believe the Oasis is a better product. The hardware is faster, the front-lit display and color temperature system has more LED lights and has a number of controls for a complete dark mode and vast ecosystem. The Oasis 3 is available not just in the USA, but enjoys robust availability. The Nook is the first large screen e-reader the bookseller has ever released and provides a really compelling product, Nook Readouts is solid, it gives you previews of new books coming out and author interviews. Ever Friday they provide free ebooks. The Nook can be used outside of the US, but you need a USA address.