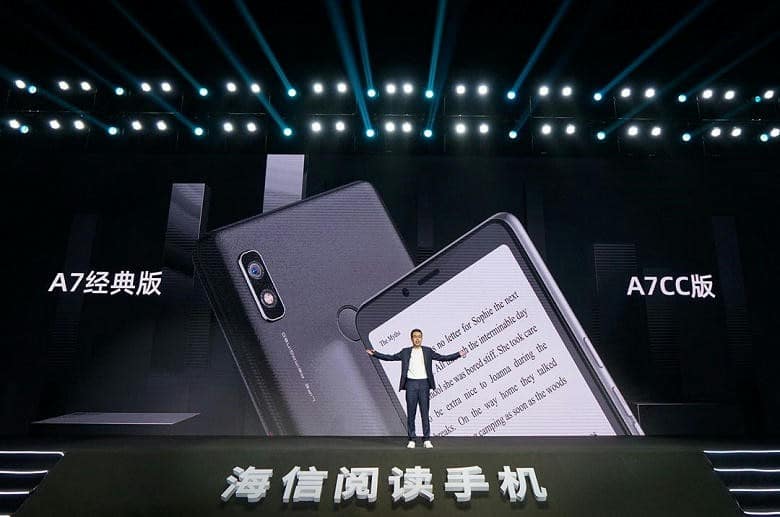 Hisense announced at a media event that they will be releasing a color variant of the A7 5G in February. It will be called the Hisense A7 CC and will utilize the second generation E INK Kalido. This will provide better color saturation and accuracy, in addition to more a more pronounced greyscale system. E INK has augmented the Regal Waveform controller to boister the refresh rate and the front-light system has been improved. This might simply be the best color e-paper phone that has ever been released.

The Hisense A7 CC will have a 6.7 inch display and have 300 PPI, so the text will be razor sharp. The new CFA will be able to produce more colors, but the exact number is unknown, since E INK is on holiday and have not disclosed if it will be more than 4,096 colors and 100 PPI. Hisense improved screen clarity with the A7, so they likely will do the same with this model. They also are emphasizing that is part phone and part e-reader. They have redesigned the ebook reading app and implemented a reading mode feature, that will disable popup notifications and distractions.

Underneath the hood is a Unisoc Tiger T7510 quad core 2 GHZ processor, 6GB RAM and 128 GB of internal storage. It has a 3.5 mm headphone jack to listen to music or podcasts, but also a speaker. It has a HIFI amplifier, and Hisense has said this is the best sounding speaker they made on an E INK phone. It is 33% louder than the A5 Pro. You can charge the A7 with the USB-C port and plug it into your computer or a wall charger. It has a giant 4770 mAh battery and has quick charging. There is a fingerprint scanner on the back to help keep it secure and also Face Unlock with the front facing camera. There is a button on the side, that is a quick key and can be mapped to do many different things, such as screenshots, launching an app, screen refreshing or anything else. The rear facing camera is 13 MP and the front-facing one is 720P.

This phone is available for pre-order from the Good e-Reader Store for $529 and will be available to ship sometime in February 2021.