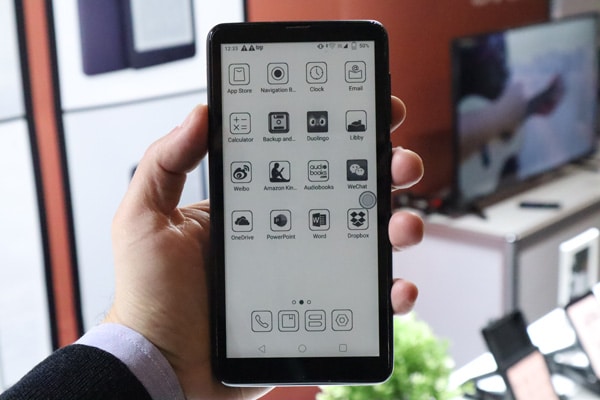 Onyx Boox is going to be releasing a new E INK smartphone later this year. This is the second mobile device that they have developed, the first one was issued in 2011. The new device will have a very modern version of Android and access to the Google Play Store.

There are two speakers to play music, audiobooks or podcasts. There will be WiFi, 4G / LTE and Bluetooth. Onyx has told me that this device shown at CES is a prototype and it will be refined and more specs will be shared in a month or two.

There is a dual camera system on the back, the design is similar to the iPhone XS MAX. The exact number of megapixels is unknown, but it will likely be 12MP to 18MP.

On a software level, the Onyx Phone is using Android 9.0, which is their third product to use a modern OS. They are currently using a skinned version of Android, calls, text messages, apps and settings icons are on the main screen. The Onyx Boox MAX 3 and Note 2 have a new vertible refresh system, which makes web-browsing, watching videos or streaming music on an E Ink screen viable. They have brought Normal Mode, Speed ​​Mode, A2 Mode and X Mode to their phone, so using Android apps will be solid.