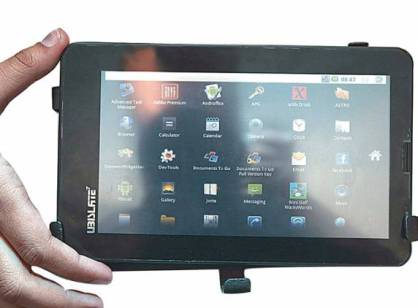 The Aakash tablet has yet to hit the ground and is not likely to for at least a few weeks. The low cost tablet is now undergoing tests at the IIT Mumbai facility for applications and content. For this, 100 samples of the tablet have been handed over to the officials, with their feedback expected in the next few weeks.

“IIT Bombay is in the process of testing the samples and developing applications and content for engineering colleges,” said Datawind CEO Sunit Singh Tuli.

It is worth mentioning that the first version of the tablet had been tested before at IIT Rajasthan and was rejected for not meeting the necessary specifications.

The Aakash project is spearheaded by the Indian Government with the aim of providing a suitable computing medium to the student community as well as the general populace. The biggest USP of the tablet has been its price, which at Rs 2,276 a piece continues to amaze tech enthusiasts worldwide. However, almost a year behind schedule, the Aakash risks losing the early advantage it once had, as there are already a host of tablet PCs battling it out in the low cost segment. While none are as cheap as the Aakash, many wouldn’t mind shelling out a little extra for a tablet that offers significantly better performance.