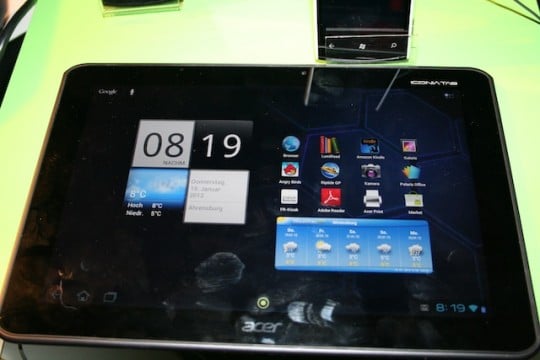 The Acer Iconia lineup of tablets have been a low-cost alternative to many of the more expensive line of tablets on the market. The company is seeking to make a major play in the world of quad-core processors with their new Acer Iconia A700.

The new Acer Iconia A700 will feature a Nvidia Tegra 3 quad-core processor and sport a ten inch capacitive touchscreen display. The resolution is the big story with this new model with the screen giving you a massive 1920×1200! There will be a front facing 2 MP webcam and a rear facing 5 MP variant. You will also get an HDMI port and USB port to transfer all of your media. Acer has learned from some of their past mistakes on the Iconia line of tablets in terms of battery life. The Iconia A100 had quite the woeful lifespan of around 4 hours but this one should give you closer to 9 with its 9800mAh battery.

This new tablet will be bundled with the companies eReading app that gives you a virtual bookshelf. You can place all of your reading, news and magazine apps very easy and really helps organize your apps. No word on pricing or availability yet, but normally when new devices hit the FCC it should be out in two months.