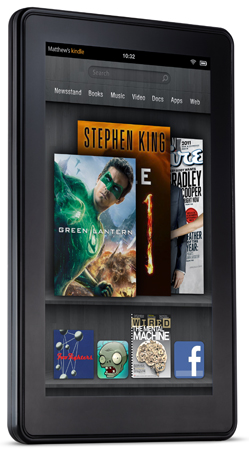 Amazon is poised to sell no less than 5 million of its Kindle Fire tablet PCs in the fourth quarter, a figure that sums up to almost half of what the Apple iPad is projected to achieve. If this is how it indeed turns out for the Kindle Fire, then it would mean the first real competitor for the iPad is here.

“It’s the first time a competitor has emerged to challenge Apple and that’s literally from a standing start.” Apple is expected to ship no less than 12 million of its iPad in Q4.

What should be of more of an aggravation to the iPad camp is that the Kindle Fire has gained by about a million more Kindle Fires during the last quarter compared to what was projected earlier.

The figures are released by Ashok Kumar, an analyst at Rodman & Renshaw, which in turn are based on checks made with the Kindle Fire supply partners. “Checks indicate that they could ship upwards of 5 million units in the December quarter [fourth quarter], which is just shy of half of Apple’s volume.” The increase in sales forecast is being attributed to the unprecedented number of pre-orders that the Kindle Fire received, which in turn can being considered due to its extremely affordable price tag of $199.

The Kindle Fire received pre-orders to the tune of about 215,000 units during the first 6 days of its launch on September 28th with the formal launch expected to take place on the 15th of November. Also, if the initial lot of Kindle Fires live up to the comsumer’s expectations—which we all believe they can given Amazon’s reputation for coming up with bug free products—sales are expected to pick up even more, so that the 5 million sales mark in the fourth quarter definitely seems achievable.

However, as it has been the case with the iPad, supply constraints of the 7 inch display panels could effect Amazon’s sales.

“The primary gating factor is on the display side. If they can fix that…it’s not demand limited. It’s a supply constraint,” said Kumar.